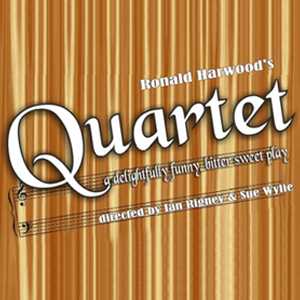 Four ageing opera singers are seeing out their last years in a retirement home for musicians.

The days pass slowly as their inflated theatrical egos sashay around, dodging each other, occasionally clashing, oftentimes hitting the realisation that their days of fame are gone.

They tell tales of great stars of yore, they bicker, they gossip, they reminisce - until they decide that the birthday of Giuseppe Verdi is cause for musical celebration and for a come-back at the rest home’s annual concert. They gird their loins, rehearse like crazy, rustle up some old costumes and, for a glorious sojourn, are a focused ensemble, albeit with the burdens of their age.

Playwright Ronald Harwood balances the pathos and bathos of ageing with some pithy humour so it makes a lovely, meaty vehicle for older actors. Director Sue Wylie with her assistant, Ian Rigney, have gathered a wonderful foursome to perform in this Quartet. They are a joy to watch.

Brian Knott delivers baritone Wilf Bond as a loud, rumbustious, and ever the fresh guy grieving for the futility of his advances. He seems in better physical fettle than the others despite the stick he carries.

Soprano Jean Horton, played by Jean Walker, is a snobbish old thing, overdue for a hip replacement. Walker gives a lovely balance as Jean’s soft side finds release from her brittle defensive shell. Meanwhile, Julie Quick moves the audience to its core as she develops mezzo Cissy Robson, from fey trouper to a poor dear soul coping with the onset of dementia. It is a glorious and vivid performance which, in the final scene, brings the house down. Last but absolutely not least is Russell Starke in a very welcome return to the Adelaide stage after too long a hiatus. He plays Reginald Paget, the old tenor on the edge of his own form of dementia. In stark contrast to Knott, Starke underplays this role and does so with masterful restraint. There’s an edge of hesitance against manic little rages and a character emerges whose spirit, the audience feels, has always risen in the face of life’s disappointments. It is a delicate and sweet character - and another memorable performance by Starke.

Director Wylie seems to have brought out the best in the actors but not in the set. And that’s a strange thing. Most of the action takes place on the rest home’s terrace. This is a row of chairs with loose cushions placed down stage with a wall and doors behind. But the row of chairs is incongruous - not a bit like a relaxing terrace. There is no table, no aspidistra, nothing else. This leaves the actors just moving around a row of chairs. It feels limited and awkward. The set screams for a table or a wicker settee.

The good set lies in wait. In act 2, the wall comes down and a fabulous music room is revealed. The actors have lots more to do physically and the pace lifts.

Quartet is not only a terrific vehicle for mature actors but also a charming diversion for old and young audiences. It is not a great play. It is a fun play - and a very nice night’s entertainment, as Dame Edna might opine.