Isabella Rossellini is the daughter of Ingrid Bergman. It has nothing to do with the sex life of insects, but it is one of the reasons she was a big drawcard at the Adelaide Festival. She knows it and she generously included a little tribute to her mother at the end of her show, along with a wistful reflection on her mother's "perfection".

Isabella is perhaps something of a rebel daughter.

Studying biology and natural history turned Rossellini on to the fascinating peculiarities of insect and animal sex - and brought out the actress in her. Hence, she shows a series of film clips in which she embodies the creatures in question.

She performs the sado-masochism of the snail with glee and fearlessly has herself cannibalised as a praying mantis. She's a hilarious house fly and a decidedly erky spider. Many of these clips can be found on YouTube and it is worth watching them. They depict the essence of the show and the sweetly cheeky way in which Rossellini handles the subject. It is as quirky and funny as it is informative.

It is all good and proper science, after all.

And her show is not a theatrical business but a platform presentation. She performs from a lectern. She wears spectacles. She uses notes.

She is a beguiling lecturer with lots of props and an impish sense of anthropomorphic humour.

On her first night she played to a packed house which responded to her 75 minutes of scientific entertainment with rousing zeal.

She had just added another delightful ingredient to a wonderfully diverse and classy Adelaide Festival.

When 15 to 16 Mar
Where: Her Majesty's Theatre
Bookings: adelaidefestival.com.au 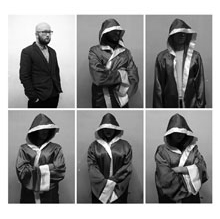 There are five candidates. The audience must vote. Many times.

But first, some personal details.

Angelo, the MC in a terrible chequered three-piece suite, encourages the 187 people in the old Queen's Theatre to give up their personal details by pressing numbers on little keypads with which they have all been provided. Age, gender, marital status, income...

Thus armed with demographics, he presents five candidates who need their votes. The losers will have to leave the stage, he warns.

Initial voting is pretty random since the candidates have not uttered a word. They are chosen by personal appeal. Then the winner and the loser may speak to the audience.  It learns a little about them. But, various tests will turn up commonalities.

Which pejorative word is most offensive? Are we a little bit racist? Are we religious, spiritual or nothing? Do we prefer certain characteristics in a leader?

The candidates' ranks slim down. They speak some more. Winners versus losers. Another round of voting and the status quo changes. A back runner hits the lead. Does the audience still favour the candidate it liked before? What will swing the vote? The candidates vie for preference but they still have no real policy.

It is politically hollow but a very interesting exercise because the audience members have only a minute to answer serious questions. Are they a little bit racist? Dare they admit it? Yes, they reason. It is anonymous and all in the spirit of entertainment, after all. So, a majority of Adelaideans own up. They reject religion and spirituality, too. And they show that they are easily swayed by not very much at all when they suddenly change their voting preferences from one candidate to another.

Well, at least it was so on the opening night of this co-production from Belgium's Ontroerend Goed and Australia's The Border Project.

It did not prove that people will vote for people without parties or clear policies for it was clearly a game being played through actors in a theatre.

The votes were tallied by a couple of "officials" at a control desk to the rear of the square dais of stage. The results were transmitted as dots of various percentage sizes on an overhead monitor.
Sometimes the voting results surprised. Certainly the end of the game surprised.

It mightn't have been theatre, as such, but it was an extraordinary adventure in collective behaviour and it left its participants filled with questions, not about politics and elections, but about their own integrity.

When: 13 to 16 March
Where: Queen's Theatre
Bookings: adelaidefestival.com.au 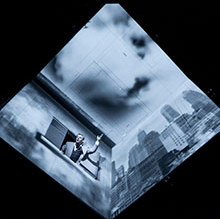 The house lights came up. The announcement was made. The show was cancelled. A technical hitch had glitched out a highly technical production on its Adelaide Festival opening night.

The audience had been in an existential otherworld when it stopped.

They were spellbound by a cube suspended centre stage in the Dunstan Playhouse. It was presented as a seedy little Paris hotel room which turned and pivoted and, with video projections and a haunt of jazz music, transformed itself into a streetscape, a recording studio...

It dominated a wonderful, extraordinary, very different piece of theatre, one delivered by the Canadian company Ex Machina and which told a tale of Jean Cocteau and Miles Davis. Its narrative emerged as if from the memories infused into the walls of the hotel room. This was the room once occupied by Jean Paul Sartre and Simone de Beauvoir. It passed on to the young Juliette Greco with whom the American jazz musician, Davis, was to fall in love but then refuse to marry because of the racial tensions of the day.

In the now, the hotel room is occupied by a Quebecois actor, in Paris to do voiceovers for a documentary on Juliette Greco - and also to lick the wounds of his own broken relationship. He chooses the room because of its history.

The room hangs - a surreal entity in the blackness of the stage.

At the beginning, it is a cube which sparkles and illuminates Cocteau line drawings and filmic credits for the play. And then, the character of Robert, the French Canadian actor, soars on wires and there it is, a mean little low-budget room. And the room pivots and becomes a package from which Cocteau may sprout, delivering his Lettre aux Americains. Again and again, the floating cube changes angles and the performers defy gravity to inhabit it.

At the same time, its core identity as the cheap hotel room grows in familiarity and purgatorial intensity. One's heart belongs to the commonality of Robert's lonely pain therein.

Needles and Opium is the revived early work of writer and director Robert Lepage, he who brought to the 1998 festival that vividly memorable work, The Seven Streams of the River Ota.

This work has an autobiographical string along with a rich counterflow of poetry, philosophy and music. It delivers the character of Jean Cocteau, his art, his words, his association with opium. It brings forth Miles Davis, who introduced bebop to Paris, and his flame, the lovely bohemian singer, Juliette Greco.

Among the exquisite and extraordinary scenes Lepage depicts in Needles and Opium is that of the trombonist being captured by Greco's performance through the basement window of a nightclub. Black and white, window bars and shadows, the visiting musician an outsider looking in. Music to music. Black and white. French and American.

Lepage uses myriad ingenious aesthetic and technical devices through the production. He uses the tinny amplification of telephone voice to play with immediacy and distance. Ditto language problems with switchboard girls. He injects irony and humour along with spectacle and artistry.

The lighting of Bruno Matte is sublime. The room which gives so many views is a masterpiece of theatre design from Carl Fillion - albeit, somewhere in its technical sophistication, it let us down - or, more precisely, left us in the air.

The play was almost three quarters in when it stopped on opening night. To come were the subjects of its title - the experiences of opium and needles in the lives of the characters living and dead.

Miles Davis was depicted by a Toronto-based gymnast and dancer called Wellesley Robertson III and already the audience had sampled his power and agility. His big drug dance scene was to come - and so much, crucially more, from the lovely Quebecois star, Marc Labreche so elegant, understated and poignant in the role of Robert.

Yet, the evening incomplete, the audience left with a sense of wonderment and delight. It had been an exceptional experience. Darkly ethereal.

In the added drama of its cancellation, it had become historic as well as memorable.

It had been another privileged dip into the mind's eye of one of the world's great theatre art practitioners.

There is a particular pace to Lepage productions. Just as the cube is somewhere, nowhere in space, the action is measured so that it suspends in time. And, for a play which is borne of the existentialist experiences, it is perfect.

When: 13 to 16 Mar
Where: Dunstan Playhouse
Bookings: adelaidefestival.com.au

Stephen K Amos – What Does The K Stand For? 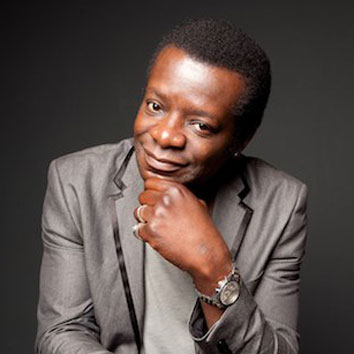 A visit to see Amos at the Arts during February and March has now become a tradition in my festival season. He is after all one of my all-time favourite comedians, a fact I have admitted to in reviews past.

This year’s show was, as expected, a great belly laugh – a couple of jokes were recycled, and early on in the piece I was nervous I had shown up to see a re-run of last year’s performance. With clipboard in hand (again) Amos told us that he was testing out a new show which he was unfamiliar with, and that he would be ticking off the successful jokes and crossing out the flops. We laughed (again). He ticked the joke off (again), and the show was underway.

The Fringe set is an hour long, making it great value. That hour also has loads of new material too, but Amos shines brightest when he is adlibbing and playing off the audience. By round of applause we were asked at the end of the show how many had seen him live before and how many were new, of the packed house more than half were having their first Stephen K experience, and it sounded like they loved him as much as I do.

Amos is a great story teller, and even when he’s not telling a joke is really engaging to listen to. Do yourself a favour – newbie or fan, get along and check him out! Oh, and what does the ‘K’ stand for? Well you’ll just have to see the show to find out!

When: 11 to 15 Mar
Where: The Arts Theatre
Bookings: adelaidefringe.com.au

The Kransky Sisters Piece of Cake 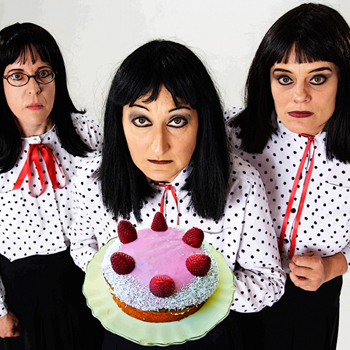 The Kransky sisters are back at the Royalty with their unique brand of macabre humour. Their new show ‘Piece of Cake’ has similar themes to their others, following the sister’s travels and life stories and interspersing it with the covers of well-known songs.

This sisters gave us their take on numbers such as ABBA’s ‘Money, Money, Money’, Beyonce’s ‘All the Single Ladies’, as well as some AC/DC. Not all of the covers were new for the trio, having been previously performed for television, but seeing them live was a real treat.

The capacity audience loved every minute of the show, once they got over the cramped crowding situation in the Royalty’s foyer beforehand. A highlight of the show was the celebration of Eve Kranskys birthday, when 2 unlikely audience members were plucked from their seats to participate in a musical number onstage. Donned in the infamous black and white polkadot blouse and pleated black skirt the audience participants, Greg and Jacob, soon became favourites of the love starved sisters too – parting with a hand shake and a kiss proving too much for them!

This is reliable comedy, where what you see and what you know is what you get. This act has endured because it is wholesome character based comedy and because the performers are exceptionally skilled at their craft.

If you’ve ever found a Kransky skit amusing – you’ll love watching them live.

When: 9 to 16 Mar
Where: The Royalty Theatre
Bookings: adelaidefringe.com.au