Story: Claire Della and the Moon prepares to Launch 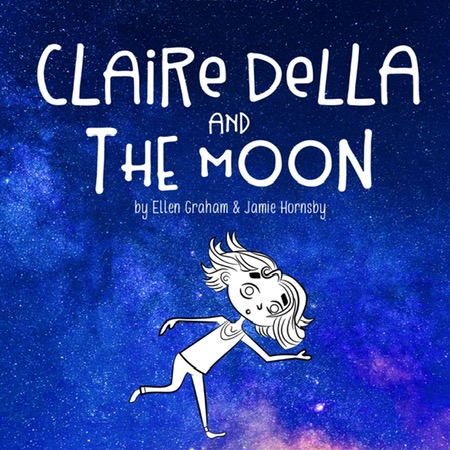 Move over Little Prince. Claire Della is coming to the sky.

She’s using a ladder and she is only going as far as the moon, but it promises a serene escape from the stresses of life here on earth.

Or so she hopes.

Even children suffer stress and depression from the complicated lives on this troubled planet.

That is the understanding of Ellen Graham and Jamie Hornsby who sought consultation with Simon Andrews, principal psychologist of OK Psychology and in a partnership with the mental health outfit, Headspace, to tap into the mental health issues confronting today’s children.

Claire Della and the Moon is the result, not only of these professional investigations but also of the vivid imaginations of the two theatre-makers. And, they have flavoured their creative juices with the talents of others, most particularly the renowned puppet designer, Stephanie Fisher, whose puppet oeuvre includes, of all things, the famous Babadook’s giant wings as well as the masks for Windmill’s Girl Asleep and even the baby crows for The Crows. Here, for Claire Della, she has created Laika, the dog on the moon.

According to Jamie Hornsby,  the plan for a new children’s show of poetry, puppetry, and mime has been brewing away for a couple of years, And, now it is realised through Claire Della as an uplifting work which may empower children in the dark world of anxiety and depression.

Scoring the inaugural Hall of Possibility Artist Residence program at Slingsby Theatre Company was a key to getting it off the ground - quite serendipitous really since, says Hornsby, Claire Della and the Moon was inspired by Slingsby’s acclaimed production of The Young King.

Being artists in residence gave Graham and Hornsby an opportunity to work with the Slingsby professional facilities.

"We are starving artists so we snuck in at night and worked for all hours,” says Hornsby.

They might be starving artists but Ellen Graham and Jamie Hornsby are very well regarded in the Adelaide arts.  Singly and together, they have been acclaimed as exciting emerging artists. They now go by the joint name of Madness of Two, under that name, they launched onto the public with an entirely zany Fringe production at the chic new theatre venue Rumpus at Bowden. The show was called Dead Gorgeous: A True Crime Clown Show.

It showcased some of Hornsby’s diverse talents, particularly on the musical front.

As a graduate of the Adelaide College of the Arts, Hornsby has shone as a playwright, actor, musician and composer. He has won awards as best new playwright and best young playwright and you-name-it. Graham, meanwhile, is recognised as an actor, model, and theatre maker. Together they are hoping that their new theatre company will make a strong impression on the future of children’s theatre in South Australia, albeit they have no plans to abandon the avant garde adult theatre works for which they are becoming known.

Claire Dells is a child of “now".

“She is a little girl who doesn’t fit in on earth,” explains Hornsby.

“She’s obsessed with the idea of living on the moon where it is quiet and safe.”

The expression of feeling different, he says, is a metaphorical interpretation of depression and anxiety.

The production has been coming together at The Parks community theatres venue, one of the best theatres in the State. It has been invaluable to the company to be able rehearse in the venue itself, thanks to venue manager Kerry Hutton.

Its season with both schools and public performances will open on September 23, and because of the theatre’s sophisticated design, even with Covid-safe seating, about 100 audience members can attend performances.  The show targets ages 6 plus and it is hoped that it also will be able to tour schools.

Claire Della and the Moon is presented with the support of the Department of Premier and Cabinet.

School bookings can be made via email at This email address is being protected from spambots. You need JavaScript enabled to view it.