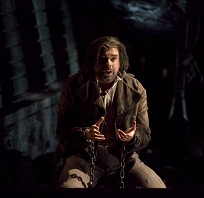 The State Opera’s final main stage production for the year was a revival of opera Australia’s 1992 production of ‘Fidelio’ – the only opera written by Beethoven. Although it was brim full of highlights, there were some disappointments as well, but more on that later.

In essence Fidelio is a dramatic and romantic rescue story. Leonore dresses as a man and calls herself Fidelio in order to gain employment in a prison where she suspects her husband, Florestan, is being secretly and illegally incarcerated by Pizarro, the prison governor. She wins employment as an assistant to Rocco, the gaoler, and eventually gains access to her husband. In the meantime Rocco’s daughter, Marzelline, has unfortunately fallen in love with Fidelio which complicates matters, and especially for Jacquino, a young turnkey, who was promised Marzelline’s hand in marriage. Pizarro has resolved to murder Florestan and tries to bribe Rocco to do the dirty work, but he refuses. Pizarro is about to commit the crime himself but is thwarted by Leonore and the timely arrival of the King’s minister who has heard of and wants to put an end to Pizarro’s villainy.

It all sounds a bit melodramatic, and it is, but not for the right reasons. Highly respected director John Wregg doesn’t get everything he should out of the text and the music – comedic moments are left begging, and drama is wasted through ‘stand and sing’ blocking. Leonore as Fidelio never looks uncomfortable as she is pursued by Marzelline, who is urged on by her father. It should have raised a chuckle from the audience, but it didn’t. Jacquino never looks quite put out enough by his competing suitor, and at the end of the opera – when all is revealed and he is reunited with Marzelline by Leonore herself – his surprise and delight is nothing more than a whimper.

Much of the high drama in the opera is squandered by Wregg’s insistence that principals should stand in rigid lines, face the audience, and sing with little interaction with each other. I could not help but compare this with the wrenching moments of high emotion and passion SASO’s production of ‘La Bohème’ earlier in the year, and with the palpable comedy of ‘Orpheus in the Underworld’, and I regretted that this production of ‘Fidelio’ did not scale the same heights, as it should have. But I have also heard it said that the text and the difficulty of the music make it difficult to achieve these things, but a company as accomplished as SASO is surely light years beyond ‘stand and sing’!

The production however looks wonderful, and the singing for the most part is first rate. John Gunter’s set design is wonderfully evocative of the stark, cold and forbidding reality of a prison, where the action is set. The first scene is stage in a laundry room which seamlessly transforms to the main yard of the prison. In Act 2 the stage becomes the deepest and most miserable dungeons of the prison, which then astonishingly morphs back into the main yard with the aid of hydraulically controlled platforms. The transformation is so splendid and complete that the audience spontaneously applauded the brilliance of the effect, and it was richly deserved. The visual impact of the set, and Gunter’s costume designs, were enriched and enhanced by Nigel Leving’s superlative lighting design, and the whole production often possessed a film noire feel to it.

Jessica Dean is just superb as Marzelline and her aria “O wär’ ich schon mit dir vereint” was beautifully sung. Douglas McNicol looked perfect as the evil Pizarro, and his “Ha! Welch’ ein Augenblick!” was dramatic but needed more attack. David Hibbard has a fabulous bass voice but his Rocco was unfortunately overpowered at times in Act I by an exuberant orchestra under the studied direction of the esteemed Graham Abbott. Hibbard’s quartet with Marzelline, Leonore and Jaquino was a high point of Act 1. Unfortunately Miriam Gordon-Stewart was indisposed and unable to perform the pivotal role of Leonore, and Australian soprano Nicole Youl was brought in to cover. Despite her impressive list of credits, Youl did not fully rise to the occasion. She was somewhat wooden, and at pivotal moments her pitch was not entirely secure. But it could be that she had insufficient time to fully prepare for the production, and this has to be a director’s worst nightmare. Robert Crawley’s portrayal as Florestan was achingly emotional and totally believable. His aria to open Act II was a highlight and plumbed the depths of the emotions of a broken man who longed to be reunited even for the briefest of moments with his beloved wife. This should have been the standard for the entire opera. The SASO Chorus again provided first rate support throughout and sang the rousing closing finale with great feeling.

Despite its flaws, and I am still unsure of the extent to which Beethoven and his librettist might be held responsible, this was a fabulous night at the opera. It looked great, the music was stirring and deeply satisfying, and much of the singing was first rate.

I can’t wait to see what SASO will be doing next year.