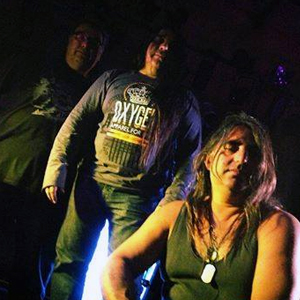 I have to admit, I’m a sucker for old school blues rock, so when I heard that ‘Third Stone – The Hendrix Experience’ was set to take a berth at the Gov on All Hallows Eve, I just had to get down to check ’em out! And I’m pleased to say, the experience was well worth bracing myself against ensuing thunderstorms, rain and the odd trick-or-treater!

Opening for the night was Big Tom’s Blues Band, a trio who pay tribute to blues rock of the bygone era, incorporating everything from old school blues like Muddy Waters and Elmore James to the more metal side of the spectrum, with tunes from the likes of Zeppelin and The Doors. Very cool stuff, and the perfect opener for a night of Hendrix heaven!

Third Stone soon took the stage, and while guitarist Jimmy (who also plays in local metal bands the Loving Tongue and Raven Black Night) was channeling that other Jimi with his headband and tie-died singlet, this tribute act are well and truly focused on the music and not the image. And that is what makes a true tribute act stand out from the fakers… Of course, taking that tack requires significant talent, particularly when it comes to the music of Jimi Hendrix, and I’m pleased to note that these guys had plenty of that in the bag! As incense burned on the stage, the band opened with a bang with ‘Killing Floor’ and ‘Are You Experienced’, then a rousing ‘Stone Free’ really got the blood pumping, with interludes of ‘Gypsy Queen’ thrown in for good measure.

The pace was kept up with the thumping ‘Manic Depression’, complete with a behind-the-head solo, and a funky take on ‘Spanish Castle Magic’, before the mood mellowed slightly for a trippy quartet of ‘Bold As Love’, my favourite, ‘Little Wing’, ‘Wind Cries Mary’, and ‘Castles Made Of Sand’. The pace was quickly picked up again, with an awesome take on ‘Fire’, with a solo-by-teeth, before heading into a bit of Band Of Gypsies stuff, ‘Hey Baby’, and ‘Machine Gun’, which surely has one of the coolest bass lines in rock! It was back to the hits next, with the great-grandfather of the (crappy) pop song ‘Single Ladies’, the original ‘Foxy Lady’, and the bluesy ‘Red House’, complete with a special guest on blues harp.

Into the home stretch there was an earth shattering rendition of ‘Advance Australia Fair’ (beautifully taking the place of ‘Star Spangled Banner’!), seamlessly flowing into ‘Purple Haze’, and climaxing with the riff from ‘Sunshine Of Your Love’. But unlike a typical Hendrix set, things didn’t end there, as a sensational jam on ‘Voodoo Chile’ rang out, followed by the cruisy ‘Third Stone From The Sun’ bringing the main set to a brilliant close. Not content to end it there, the crowd cheered on an encore of ‘Hey Joe’, which wrapped things up beautifully. The guitar was on fire, and I’m sure Hendrix would have been looking down from the big band in the sky with a big smile on his face! Awesome stuff!

When: Closed
Where: The Gov
Bookings: Closed