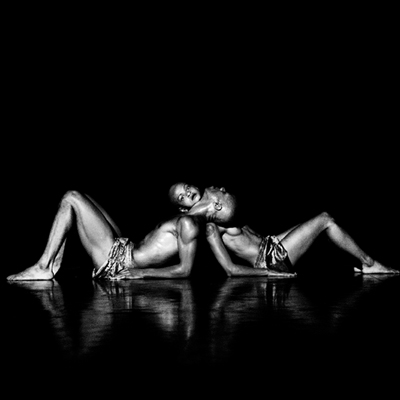 One of the great things about the Adelaide Festival is having New York come to us. American choreographer Shamel Pitts was trained by Israel’s Ohad Naharin and passes on Naharin’s Gaga dance language in the Big Apple. He was enthralled by pupil Mirelle Martins from Brazil and their collaboration over several years had resulted in Black Velvet. Pitt says it was “as if we were two different aspects of the same person.”

The two dancers have shaved heads and are naked except for simple cloths woven around their waists. Both costume and skin are bathed with a chocolate-coloured sheen resembling, well, black velvet – a sort of hyper-realisation of their natively dark skins. The dance begins excruciatingly slowly and indeed is measured throughout, excepting some explosive frenetic movement resembling the inner workings of a mad clock. Yet the narrative arc is one of love, of engagement and entanglement – an intimate investigation of both masculinity and femininity. Pitt’s choreography, he says, celebrates his female family role models as a gay black man. Watching Pitt’s and Martin’s beautifully toned and muscular, yet lithe, figures writhe into each other’s body hollows is both erotic and joyful.

Black Velvet is a mesmerising work of universal attraction. Bravo!