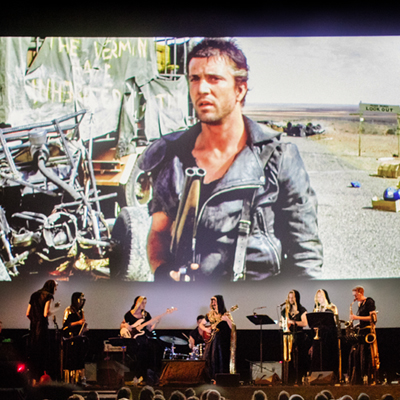 This one-off performance was a real hoot. A large screen is set up in the workshop deep in the bowels of the Festival Centre. The audience is surrounded by jungle motifs including faux life-sized stuffed jungle animals. Geoff Cobham’s lighting above signifies colourful contrails from soaring birds. And below the screen is the Shaolin Afronauts – Adelaide’s own 10-piece afrobeat/soul/funk/avant garde jazz band. They completely enhance the Mad Max movie experience.

George Miller’s 1979 dystopia pic still packs a punch and the young NIDA graduate Mel Gibson is very lithe and handsome. The first four-fifths of the film is a horror job movie; you are terrified the feral motorbike gang will wreak violent havoc at any time. The remainder is a vengeance film, where Mad Max takes revenge for the murder of his son and the near-fatal injuries to his wife. Never mind now that Max’s final retribution torture is inflicted on a man who pleads mental illness and was shown not to be guilty of torching Max’s cop partner (it was an accident!). You don’t have to be a psych nurse to figure that all the characters – cops or crooks – are struggling with their inner demons.

The Afronauts got everyone’s attention by bellowing out the suspense during the opening car chase when Max mows down his first bad guy in the film. Where the Afronauts’s nuanced notes were overwhelming, the subtitles kept you filled in, but there were a few short bits where the original soundtrack/dialogue sufficed and the Afronauts took a deserved breather. When their brass revved up and the guitar wailed with the Bronze’s sirens, the Mad Max mayhem was overwhelming. Bravo!

P.S. Sorry, show over. One night only

Where: The Workshop, Adelaide Festival Centre