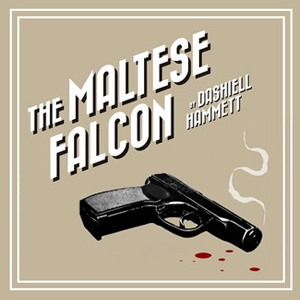 It is live theatre, but it feels like a black and white movie.

And there, on stage at the Goodwood Institute, in their hats and gabardine raincoats, come the characters of Dashiell Hammett’s 1929 San Francisco world. There stars private eye Sam Spade, old-school gumshoes, gorgeous redheads and nefarious villains. And tales of treachery, deceit, bribery, double-crossing and underworld conspiracy. In this case, it’s all in the quest for the mysterious statue of a black bird.

Rob Croser is an old hand at turning out classy productions with artful Croser/Roach sets and fabulous lighting. In this case, his skilled production values shine forth, most especially in Bob Weatherley’s five-star lighting plot. But there are so many touches: the art deco motif on the apartment door, the stained glass window projections, the double-sided desk which at one moment is a private eye’s office and the next has pivoted into posh governmental decor, the double-sided doors where one sees protagonists waiting in the dark hallways. The scenes change with quiet swishes of well-oiled mobility in the darkness. Since The Maltese Falcon was most famously known as a film, Rob Croser has given his adaptation a filmic pace with many quick scene changes.

The old-school detectives are scruffy and stoic, a lovely partnership of David Roach and John Oster. Oster is a character actor and a half and peoples the stage deliciously in assorted guises. There are some lovely performances. Madeleine Herd, with her lovely voice and long red tresses, gives all the elements of seductive artfulness and cunning as the alluring villainess while Stuart Pearce uses his imposing form and a very distinguished voice to bring into fine life the notorious underworld figure of Casper Gutman. Of strident voice and indeterminate accent is Andre Vafiadis, hamming it up to give the plot its dash of Peter Lorre madness while Will Cox becomes hunched and deeply threatening in the role of the henchman thug, Wilmer.  Emma Bleby is downright nice as Spade's downright nice office offsider and Ashley Merriel fills the other female roles in the conspiratorial shadows.  Oddly, the costuming for the female characters is somewhere the other side of weird, reflecting no particular period and absolutely no respect for the female form. Memorably awful is the best description. The men, on the other hand, are suave or scruffy and of the period with Patrick Marlin in the lead, slick-haired and handsome albeit gobbling his massive load of dialogue with machine-gun speed. Strangely, his Sam Spade skips the old Humphrey Bogart laid-back sexiness. This Spade feels just a bit psychotic with his abrupt shouting fits and temper tantrums.

One wouldn’t want to be on the wrong side of him.