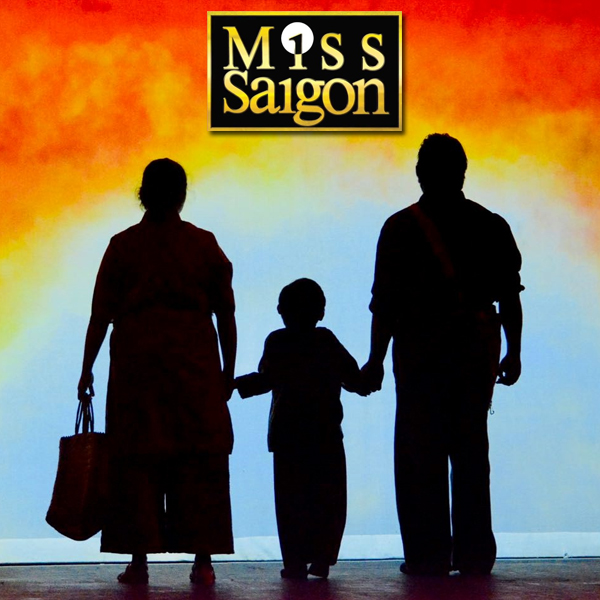 The popularity of Miss Saigon has always been somewhat mystifying since it is musically tough and tedious and the story line of love and loss in war-ravaged 1970s Vietnam is downright heartbreaking.

If there is a secret to its success, The Met tapped right into it with stunning singers, orchestra, costumes and effects.

This is a potent production.

The principal, Kim, the displaced Vietnamese bar girl is played by Filippina songstress Elena Amano who, like a classic operatic diva,  brings forth a striking might and beauty of voice along with a daunting vocal range. She carries emotion and character to the fore and the audience swiftly accepts and loves her in the role, just as the director knew they would.

Around her, assembled by director Ben Saunders and his team, is a large and talented cast of impressive singers enhanced by good production values. They give Miss Saigon’s epic songs with their repetitive Claude-Michel Schonberg music a layer of professional sheen which musical director Jillian Gulliver polishes nicely with the 15-piece orchestra.

On first night, there were just a few early sound-balance issues, one with the microphone of Jarred Frost, playing the American Marine Chris Scott. He is a rich tenor and a simpatico actor. Miss Saigon was not the only one who fell in love with him.

And, all around him is a wealth of expert support. Omkar Nagesh is one of those rare performers with “presence”.  He moves with exceptional grace and, as The Engineer, he lights up the stage, funny, outlandish, appalling, loving, opportunistic, and utterly focused. It is a great character role and he devours it with relish.

Tom Dubois as the compassionate solider, John, brings the house down with his passionate baritone Bui Doi solo. What a voice. And then there is Jemma McCulloch, as Ellen, the hapless American wife. Her glorious voice has a professional polish matched only by the heart-rending dignity of her characterisation.

There is a strong Asian presence in this production, bringing with it some beautiful moments.  Shane Huang plays Thuy, the villager matched from childhood to wed Kim. Huang delivers a performance powered by emotional understanding as he pleads and bullies for his betrothed. Contrastingly and bringing joy and exuberant litheness wherever she goes is Maria Gabriela Maglahus as the vivacious GiGi.

Of course, there has to be a child in this tale of the post-war children of Vietnam and the son born to Kim after her great love affair with GI Scott was well embodied on opening night by little Rafael Blanca.

The ensemble work, both male and female, is strong, with choreography by Selena Britz and there are scenes of vivid colour and movement as well as drama and choral aesthetic.  The famous helicopter scene is very cleverly achieved and is met with spontaneous applause by the audience.

Indeed, with not a glimmer of the fiscal freedoms of the Cameron Mackintosh mega-production machine which brought Miss Saigon to the fore as a respected reflection of the political and human miseries of the Vietnam war, The Met has done it proud.