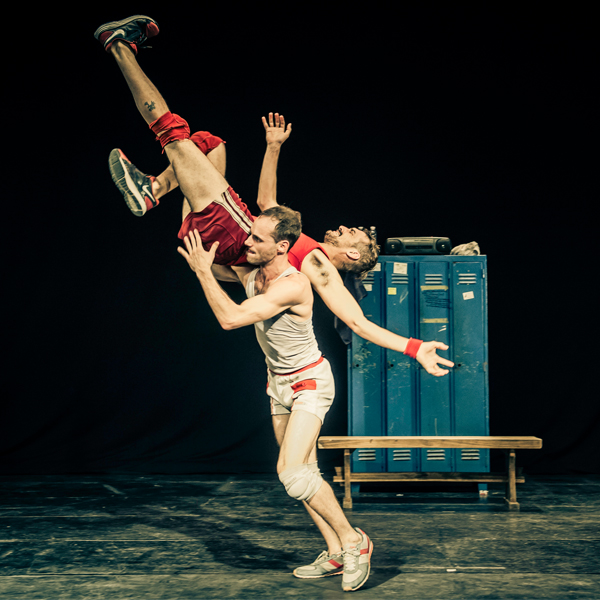 Two buff men dressed in loose track pants and singlets warm up while the audience files in. In the background are some gym lockers, loads of water bottles, a radio and a bench. They mostly ignore each other but some glances indicate incipient competition. The moves are a quirky combination of the athletic and the aesthetic. The lights dim and rise, the soundtrack amplifies and the games begin.

These Argentinean red roosters circle and joust, show off and preen, compete and compare for one-upmanship. The sweat flies and the dirt on the floor grease their clothes. The Latin dance music sets the beat. Macho moves sometimes unexpectedly abut with homoerotic situations where the men are momentarily surprised by their acceptance, but they quickly revert to a ritual courtship. The entire floor space is alive with their fluency. All body parts have star turns showing off funny feet or happy hands, and in imitations of cocks or bulls. The show stems from a Spanish tradition of comic opera in a vernacular style of common humour. Luciano Rosso is a YouTube star and a favourite son of Argentina. His hilarious eye-popping facial work makes one grimace in sympathy.

About half way through there is a smoko break like no other you have seen. Alfonso Barón, a former elite sportsman turned actor, fiddles with the radio and dials in broadcasts familiar to Adelaide ears. Wait a minute, that bit of news just happened this morning. Yet the performers smoothly incorporate it. Amazing. Undressing to sheer jockey underdacks, they grapple each other into tiny footy-like shorts. Play wrestling raises the stakes between the two and more and more holds linger toward the crotch. Mock shock from the other, but oh. Fingers push each other’s faces into Francis Bacon-like distortions. But through the whole glorious hour, there is a lovely translation from eyeing each other off to getting very familiar.

Seeing this comic dance sustained for an entire show is an absolute joy to behold, the playfulness and virtuosity of these two accomplished comedic dancers astounds. The moves, directed by Hermes Gaido and choreographed by Nicolás Poggi and Rosso, are inventive, super tight and fast paced. I’m sure you’ve never seen one man sing into the mouth of another. For an encore, Luciano Rosso performs a mimed song in a funnily grotesque way – an extra gift for the audience. An hour of unrelenting fun and delight. Bravo!