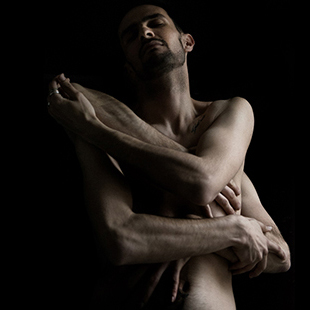 If burlesque is about extravagance, parody and caricature particularly with a focus on nudity, then Brodie John’s Burlesque by Force is not a burlesque performance. Rather it is a carefully constructed glimpse into the fragile world of a rape victim who shelters behind the persona of a burlesque performer. It is a relatively short piece – some 35 to 40 minutes – but it packs a punch that leaves you thinking long after you have left the theatre.

Despite its impact, if Burlesque by Force is to have an ongoing existence as a piece of theatre beyond its recent world première, as it deserves, it needs further development. In short it needs to be longer and would merit being less ‘designed’ in its format; more on that later.

Brodie John wrote the script and was the sole performer in what was a well-executed, well designed, stylish and affecting production. As the burlesque performer, he enters from the stage left wing acknowledging the enthusiastic applause of an unseen audience. After taking several bows, the performer retires to his dressing room and starts the process of removing makeup and costume, and, as the layers are stripped away, the person behind the performer is slowly revealed through an extended soliloquy that is interspersed with a recorded voice over.

The narrative is about the performer’s rape at the hands of a former sexual partner whom he still sees, and acknowledges, from time to time as if nothing had happened, or as if it is all forgotten. But it is not forgotten, and it is not forgiven. The hurt and shame and disgust persist and the performer shares with the audience in vivid detail his personal struggle to not let this gross, violent act be a defining event.

Brodie John’s script is intimate and confronting, but at the same time beautiful as it lays bare the contradictions of sexual behaviour. It explores the feelings of self-guilt that are often reported as typical of rape victims, but it stops tantalisingly short of being a fully immersive experience. It warrants further exploration. I wanted to experience the performer’s pain more than I did. I wanted to get under the skin of the ugly suppurating sore that is surely the unwarranted feeling of guilt that the victim feels.

Brodie John circulated an ‘open letter’ to the audience in which he said that he was “honoured” that the audience had come to the performance and that he would be “humbled” to meet the audience after the show. The letter makes for interesting reading – I cannot doubt its sincerity – but I would have liked its sentiments to have been somehow included in the narrative of the script. I’m sure it’s possible.

Marissa Bennett (director), Abbey Howlett (composer) and Stephen Moylan (designer) have all left something of themselves in this production, but none more so than Brodie John.

Burlesque by Force will play in the next Fringe Festival. I hope there is enough time for it to be developed further. It deserves a new audience.