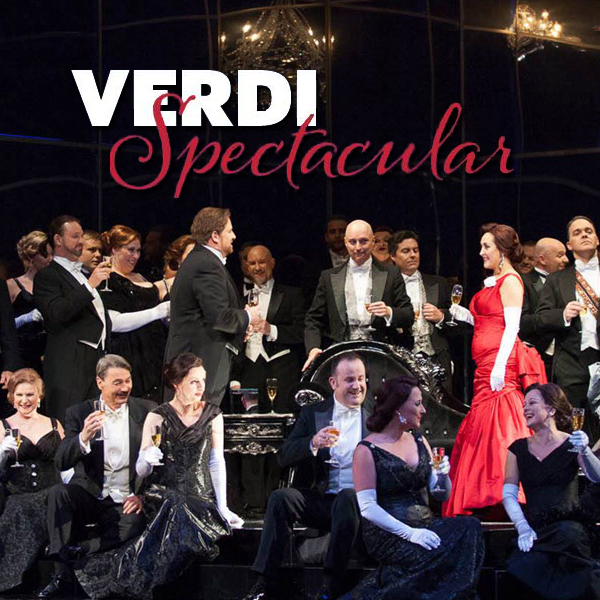 Opera spectaculars are a winning format for the State Opera of South Australia, and for the public. What could be better than a packed program of popular arias, overtures and choruses? Spectacular operatic singing and music, without the in-between bits! Can’t do better than that!

On this occasion the State Opera staged for two nights only a hugely successful celebration of the glorious music of Giuseppe Verdi, who is one of the pillars of the art form. Seventeen pieces in all were presented ranging across Verdi’s better known operas, including La Traviata, Il Trovatore, Rigoletto, A Masked Ball, Aïda and Nabucco. (He composed more than 25 operas, but not all are well-known or equally popular.)

Dr Stephen Mould, who is a senior lecturer in conducting and operatic studies at the Sydney Conservatorium of Music and has a long list of successful international and domestic conducting credits to his name, conducted the Adelaide Symphony Orchestra which was not at full strength. A number of principals were absent but it mattered not a jot. The talent of the orchestra and Adelaide’s general musical talent pool runs deep, and Mould’s decisive conducting extracted the goods. On only one occasion – in the trio Quale insolita gioia from Aïda – did Mould allow the might of the orchestra to overpower the singers, but that was only for a phrase or two. It should be noted that the singers performed with the conductor and the orchestra to their backs, but somehow the communication between Mould and the singers remained tight. (Incidentally, Quale insolita gioia was perhaps the item on the program that was the least appreciated by the generally enthusiastic audience.)

The programme began with a stirring performance of the emotive overture from La Forza del Destino. Dean Newcomb’s clarinet work was first rate. The overture was met with enthusiastic applause and the audience was put right into the mood for a rollicking good time. Mould spoke directly to the audience about each item that followed and his erudite comments were both instructive and witty. The man has a nice warm style, without a hint of gratuitous flamboyance. The audience warmed to him from the outset.

The first aria of the evening was sung by sopranao Gisele Blanchard. Dressed in a stunning red and green gown, her performance of Sempre Libera from La Traviata was effortless. The difficult staccato leaps were conquered with ease, as were the gentle and quiet leaps in Caro nome from Rigoletto.

Baritone Mario Bellanova was outstanding in every aria that he sang. His facial expression, gesture and general acting skills brought to life everything that he sang. His rich, velvety booming voice was note perfect across the full register of every aria. His Credo from Otello and Cortigiani from Rigoletto forced one to think differently about the villains he was portraying. He allowed humanity to shine through even the darkest moments.

Mezzo-soprano Elizabeth Campbell again demonstrated immense acting skills and her detailed understanding of the repertoire in her layered performances of the deeply tragic Condotta ell’era in ceppi from Il Trovatore and her part in the ever popular quartet Bella figlia dell’amor from Rigoletto.

Tenor Bradley Daley and baritone Jeremy Tatchell sang the first duet of the evening – Dio, che nell’alma infondere from Don Carlos – but suffered a few pitch and timing issues. However, Tatchell was at the top of his game with Morte di Rodrigo, also from Don Carlos and Daley fared much better (with Blanchard) in a lusty performance of Brindisi from la Traviata which suited perfectly his tessitura. His La Donna e mobile from Rigoletto was a little too nasal and unemotional.

Soprano Teresa La Rocca, like Bellanova, was a highlight of the evening. Her strong and pure soprano line cut through the most difficult phrases like a hot knife through butter. Ecco l’orrido campo from Un ballo in Maschera traverses the lowest lows to near highest highs for a soprano voice, and she sang it beautifully, and effortlessly, with buckets of characterisation as she did in the trio from Aïda and the quartet from Rigoletto.

Tenor Norbert Hohl, who is often seen in the chorus, sang several principal roles and demonstrated not only his own rich talents but also demonstrated the depth of talent that lies in the chorus. Mould commented that the chorus of the State Opera is one of the best in Australia. He is of course quite correct, and one isn’t parochial either! The chorus also sang the iconic Anvil Chorus from Il Trovatore (and immediately reprised it!) as well as the ever popular Va Pensiero from Nabucco. The choruses were rousing, musical and were hummed by the audience well into the night after they had left the theatre.

A great concert! Long may State Opera continue to present gala ‘spectacular’ formats. There are so many more possibilities still to explore! If you are ‘opera shy’, have no hesitation in coming to the next spectacular whenever that should be!