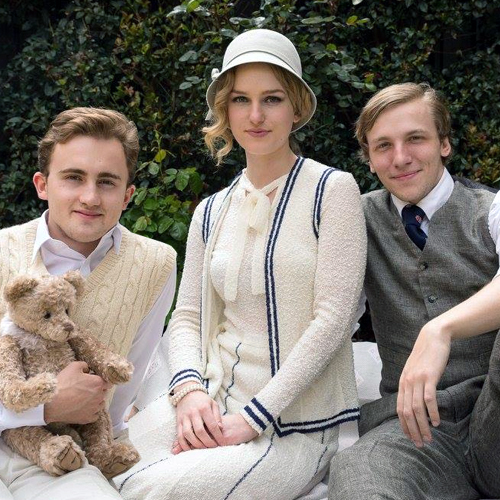 Elegant and stylish. These hallmark characteristics of Independent Theatre’ productions shine forth from the moment the curtain comes up on Brideshead Revisited.

Not that there is a curtain. It’s all about lighting and simplicity.

Rob Croser and David Roach, with lighting designer Bob Weatherly, have found that a clean and lean look is what suits the Goodwood Theatre. Hence, just two long benches adorn a dramatically raked green stage which converges towards a huge framed screen upon which photographs are projected as virtual backdrops. Sometimes they’re exterior architectural images of Oxford, Venice, or Brideshead. Sometimes they are interiors. Occasionally they go a bit further to include art for the artist of the play, at one point creating an aesthetic of such drenching beauty that one would gladly let the play freeze there.

Will Cox as the older Charles Ryder returning in uniform to be billeted in the castle where once he loved and lost, sets the mood for the audience. He is narrator. We are about to hear a story. Audience members settle into their seats expectantly.

They are not disappointed.

Evelyn Waugh’s tale of bisexual love, family ties and religion unfolds eloquently through the heart and eyes of Charles Ryder, an atheist in a seething pit of conflicted Catholics. It is the tale of Sebastian, the spoiled beautiful dipsomaniac rich boy asphyxiated by his strictly devout mother, and of his variously distracted family members in their great and glorious castle. It is the story of how relationships may affect destinies and of how siblings may supplant one another. In this case, with Sebastian gone to his various alcoholic fates abroad, it is how Charles sees shades of that love in Sebastian’s troubled sister, Julia.

It is a vast and complex human portrait which spans 1923 to 1943. Only the little sister, Cordelia, is to emerge as a nice person, and she is deemed “plain” and alone.

Director Rob Croser has directed this show with his usual finesse and chosen its cast well. Will Cox, in a brown suit and waistcoat, carries the play with immense sensitivity. His eyes are everything. A beautiful actor. Then again, Ben Francis, shows the depth of his extraordinary versatility by embodying with agonising accuracy the needy, overwrought ambivalence of Sebastian. His fear of the judgemental prying of his mother and his need for unsullied loyalty tear into the heart of the audience. As he evolves to be the alienated alcoholic expatriate, so does the characterisation succinctly complete the picture. It will not be forgotten.

Madeleine Herd plays his sister Julia, a woman who breaks from the family values with her relationship with the divorced Canadian tycoon, Rex. Her defiance of the strictures of Catholicism becomes her inner torment, albeit she never loses the superficial grace of the English aristocrat. Herd's key to this characterisation is her voice and delivery which, with uncanny similarity to English actress Michelle Dockery, imbue Brideshead Castle with surprisingly fitting shades of Downton Abbey.

The rest of Independent’s cast play multiple roles. Paul Reichstein as the arrogant dandy, Anthony Blanche, is one of the delicious high spots of the production.  David Roach plays myriad senior roles from fathers to teachers and, as ever, is unerring and a pleasure to behold. Brodie Watson-Victory adapts so completely to his contrasting roles that he could be different actors. And Emily Stewart, who has to grow up in front of the audience's eyes, comes into her own when Cordelia emerges as an interesting adult.

The play itself, adapted from Waugh's book by Roger Parsley, loses some of its momentum towards the end when all the guilt, doubt and religious redemption untwines in the great death bed scene.  It was ever a troubling ending; it beggars the credibility that the rational atheist is converted at the eleventh to join those he has witnessed so deeply punished by their cruel and superstitious religion.  But it sends the audience away with cultural dilemmas to dissect.