Interview: DeLaine and Raymond side by side, by Side Show 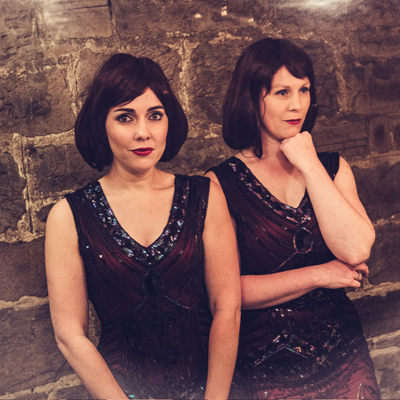 Side Show. The Hills Musical Company. The Stirling Theatre. 15 Apr 2018

Side Show the musical is a story based on the early years of real life conjoined twins Daisy and Violet Hilton. The twins were born in Sussex, England in 1908 and spent their childhood being exhibited around Europe before being taken to America where they would become an act in a travelling sideshow.

The musical –by Bill Russell and Henry Krieger – opens with the twins performing for one such Side Show under the care of their master known as ‘Sir’, and meeting an out-of-luck promotor in Terry Connor. Terry convinces them that they have more potential than they realise and encourages them to leave with him and travel to the Orpheum circuit where he can get them booked as performers in vaudeville.

Taking on the mammoth task of playing the Hilton sisters are two of Adelaide theatre’s most well-known and respected performers, Rebecca Raymond, as Violet, and Fiona DeLaine, as Daisy. Both Raymond and DeLaine admit to having fallen in love with the music, and that it played a large part in their decision to audition. “Years ago my husband put the song, I Will Never Leave You on a mix tape for me and I fell in love with the show then. I couldn’t pass up the opportunity to be a part of this production,” DeLaine recalls.

Raymond and DeLaine agree that taking on the roles of real life people adds an extra level of complexity to their performance.

“When you are playing someone who really existed there can be a bit more pressure, as you want to represent them in the best way possible” Raymond says. “There are quite a few articles and even videos or films of the girls… so I have read or watched these [as well as] articles about the time.”

DeLaine has tried not to get too caught up in becoming “the real-life version of Daisy”. Her focus has been around working with what the writers of the musical presented in their work. “I have taken inspiration from the book and score and from Bec Raymond’s version of sister Violet to create an authentic relationship,” she says.

As the show progresses and the twins decide to take a punt on Terry and his friend Buddy, they quickly realise that they have been emotionally dependent on both each other, and their fellow freaks. This is where the core themes of the show are explored.

“The show is about belonging, acceptance and staying true to yourself,” says DeLaine. “The Hilton twins go on a journey of self-discovery… searching for a way to be loved [and] eventually finding out how to love themselves.”

Raymond adds that Love is at the core of her character’s arc. “Violet wants to be like everyone else, fall in love, get married and have a family,” she says. Daisy on the other hand couldn’t be more different. Despite being identical twins and joined at the hip their dreams and desires are polar opposites. “Daisy is driven by her need to be validated [and] noticed as an individual in her own right. She tries to gain strength through external things and people which has its complications,” DeLaine concludes.

Ultimately the show is about finding one’s place in the world, and for these girls, not being seen as “freaks” anymore. It is a story of acceptance that is universal. Everyone is searching for their own way of fitting in. Side Show highlights that through the eyes of people we can only empathise with given their circumstances.

Performing the whole show literally joined at the hip has also had its challenges, Raymond and DeLaine note. “Being attached to someone else is rather interesting!” Raymond laughs. “You do have to learn to walk together, to still act natural with your arms, and to do everything with someone very much in your personal space.”

And if walking wasn’t complicated enough, this is a musical, so it wouldn’t be complete without a bit of choreography. “Dancing is difficult enough on your own but picking up choreography while attached to another person has been tricky” DeLaine adds.

“This team has had a very clear vision for this show from the start, and have been dedicated in their pursuit to bring it to life with integrity and authenticity,” DeLaine says. “The Cast have been fantastic,” adds Raymond, “this is a different show and we have had many rehearsals with cast members missing because of the Adelaide Fringe season but everyone gets on really well and has been working so hard.”

Raymond was in Big Fish and couldn’t wait to work with the production team again. “They are very dedicated and, on top of that, wonderful to work with” she says.

“They are also very supportive and understanding people which [makes for] a safe place to learn and create” DeLaine concludes.

Side Show is playing at the Stirling Theatre, just 10 minutes up the freeway, from the 20th of April until the 5th of May. The quaint theatre holds only 200 patrons per show, so don’t hesitate to book your tickets early to avoid disappointment.

“If you loved The Greatest Showman you’ll relate to this”, says DeLaine in her closing remark.

Be sure not to miss it!

Editor’s Note: Paul Rodda, who compiled this interview is also a member of the cast of The Hills Musical Company’s Side Show and plays the role of Terry Connor.