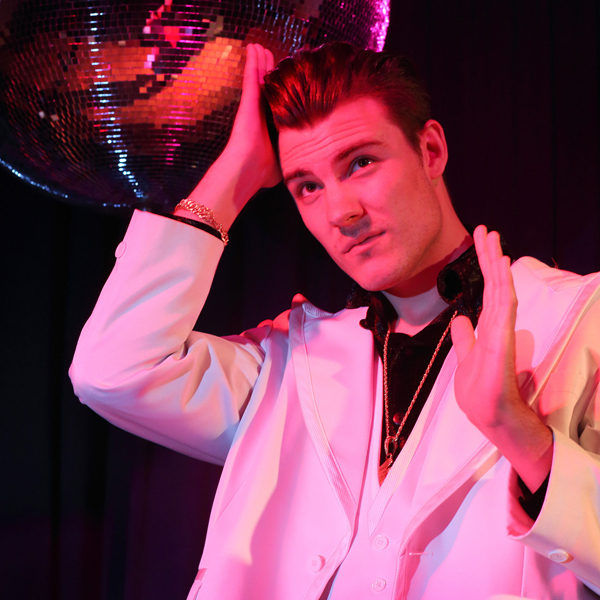 In just under a week’s time Matt Byrne Media will open the South Australian premiere of Saturday Night Fever at the Arts Theatre. Based on the John Travolta movie of the same name, and incorporating the music and lyrics of The Bee Gees, the show is sure to get audiences dancing in their seats.

The production is being designed and directed by Byrne, with musical direction by Paul Sinkinson and choreography by Sarah Williams.

The show stars Sebastian Cooper as Tony Manero, the role made famous by Travolta, along with a local S.A. cast of musical theatre veterans and newcomers.

Cooper explains that Byrne is very passionate about this project.

“He has been trying to do this show for a long time, it is close to his heart being that he grew up in that era and he loved the disco… he tells stories about going to the Arkaba and the Lion and dancing to this stuff back in the 70s.”

Originally auditioning to cover a cast member who is travelling overseas in the second half of the season, Cooper says he was pretty laid back about the audition.

“The audition process was really fun, I didn’t feel any stress, which is interesting because I was with Matt… and Sarah who I’d never met before… they made me feel really comfortable.” He confides.

“Matt broke my walls down really early, and sort of forced to me to really feel it… to bring it out of me”

A few weeks later Cooper got a call from Byrne telling him that the lead actor had to pull out due to professional commitments, and he wanted him to step up and take on the role of Tony.

Cooper recalls being taken aback. “Tony MANERO?” he exclaimed “but, I’m just the backup of the backup guy?”

Byrne had seen something in the young performer though, and told Cooper that after his audition he was really excited.

Tony Manero marks Cooper’s largest role in a musical, and to top it off the show runs for nearly a month, playing for two weeks at the Arts Theatre and two weeks at the Shedley in Elizabeth.

“It’s the longest season I’ve ever done, but it’s also the most I’ve ever had to learn” Cooper observes.

“I think I have a hand in almost every scene, there aren’t many pages in the script where I haven’t got anything highlighted. It has been a really intense experience.”

As well as being Cooper’s first time working with Matt Byrne Media, the rest of the cast were also largely unfamiliar at the start of the process.

“I worked with Amber [Platten] in the Pajama Game (Northern Light Theatre Company), but apart from that everyone else is brand new, which is really exciting to be honest”.

Cooper loves the intimate and often life-long friendships and connections you get from the theatre. He finds it a personal and often emotionally intense experience which forms strong bonds.

Byrne is renowned for taking risks and pushing the envelope with his productions and this show will be no different.

“It’s a little bit scary… because [you wonder] what if I’m no good?” he ponders. “But at the same time, it’s a real honour that a guy (Byrne) who has been doing this for years sees me and casts me; [it makes] you think, maybe I am doing something right.”

When it comes to the choreography Cooper is pragmatic.

“I would consider myself a mover before I call myself a dancer!” he chuckles.

Sarah Williams is the show’s choreographer and has been recreating the discotheque vibes of the era.

“There’s a couple of big group dance numbers in the show” Cooper points out. “But it’s not like [most] musicals… where everyone starts to sing and dance together for [no] reason.

“The reason we are all dancing together is because you did that in the disco… and she’s done really well to recreate that.”

Byrne has also gone to great lengths to acquire parts of the set. His centre piece will be a showstopper in its own right.

“The dance floor is the Taj Mahal of the set” Cooper exclaims.

“They had a working bee the other day, and… there is a lot going into it. The scenes take place in quite a few different areas, the family house, the disco, the bridge, and the dance studio, and they are doing their best to recreate an authentic vibe.”

Byrne has none other than Sue Winston on the mammoth task of costume design again, too.

“She is very aware of what the fashions were of the time” Cooper explains. “Our costumes are incredible [and] most of it is original.”

Cooper really wanted to avoid making his version of Tony Manero too much like John Travolta.

“I have seen the film before, but it was a long time ago.” He says. “I watched it around the same time I first watched Grease.”

He says he has avoided the film, and looking too much at Travolta.

“Whenever you google Saturday Night Fever immediately you get pictures of John Travolta with his [trademark] style and… look.

“I don’t want to be compared to John Travolta. What we are doing is completely different from the movie. It’s a similar story, but turning it into a musical, adding singing to the characters, gives them an extra dimension that the movie doesn’t have.” He continues.

The show is heavy on Bee Gees content, but surprisingly it doesn’t always sound like the well-known Bee Gees’ songs.

“It’s Bee Gees’ music, but it’s not a Bee Gees’ tribute show.” Cooper explains. “Most of it sits in my vocal range [and] I already know most of the songs.”

The musical is a collaboration of Nan Knighton, Arlene Phillips, Paul Nicholas, and Robert Stigwood. It features the songs of The Bee Gees, but isn’t like watching a juke-box musical of their repertoire.

“The arrangement by Robert Stigwood – who is from South Australia – makes it sound nothing like the originals” Cooper explains.

“People will go to the show and hear the songs and think, ‘I know what that song is but it sounds nothing like what I am used to hearing’.”

The clever arrangement means the lyrics of the songs transcend the original and develop into something else entirely, especially when applied to the situation that the characters are in.

“Iman Saleh, who play’s Bobby C, sings Tragedy” Cooper points out, “But it has changed from a disco song into a really powerful rock ballad [that] sounds like it should be by Aerosmith or Bonjovi.”

Cooper warns not to underestimate this show.

“A lot of people may think it’s not a musical, it’s just a Bee Gees show. But, they do so at their own peril.”