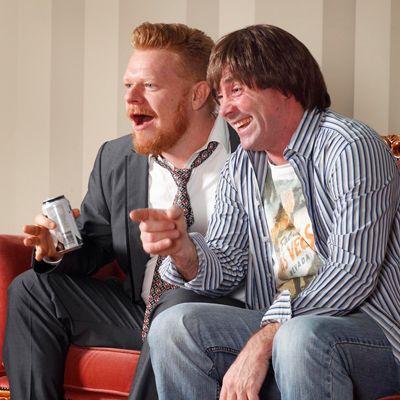 “It’s very light hearted, just a couple of lads who live together in a flat” says performer Rohan Watts.

“They both have love interests. Gary, Rohan’s character, has Dorothy, his long suffering, on-again, off-again, girlfriend, and Tony, Brendon’s character, has Debra, who is the girl that rents the flat downstairs, and she is the object of his affections. He is smitten by her, but she doesn’t really want to give him the time of day.”

The award-winning British sitcom was a boisterous success for six years in the 90s.

“I am delighted to have gotten permission from author Simon Nye to present four of the funniest episodes in the show’s outrageous history” says Producer / Director Matt Byrne.

Byrne has chosen four episodes from the 6 season run of the TV show, but they aren’t completely random.

“They are called Bed, Marriage, Drink, and Sofa… and they translate really well.”

Originally designed for television this adaptation for the stage does have a few challenges of its own.

“It’s a sitcom designed for TV… so the formatting is a little bit different” Watts continues.

“They have the luxury of quick cuts and cut away scenes where the live show doesn’t.”

There are some flash back moments however, which have been cleverly intertwined with pre-recorded footage.

“We do some flashbacks live on stage as well… which is kind of cool” Watts adds.

“We break the fourth wall a fair bit, which is right up my alley. You literally look at the audience and wink in some moments”.

Men Behaving Badly came along when political correctness was in full swing and helped swing the pendulum back the other way.

“The humour is really pitched in that mid to late 90’s level” says Watts, “Ala Black Adder or Red Dwarf. Its good British humour; very much that bawdy British sensibility.”

The core cast is the 4 leads, but there is also an ensemble of other characters.

“It’s a few people wearing many hats, filling out the scenes. Matt [Byrne] has a little cameo as Les the Bartender” adds Watts.

The show is basically ready to go. Now it just needs audience laughter to take it to the next level. But even after months of rehearsals, everyone is still laughing.

“The supporting cast and the crew, that sit there and watch every rehearsal, still laugh” Watts says, “That is a testament to the quality of the writing… we’ve got jokes that are 20 years old, which we’ve said 30 times, and they are still funny. There are moments where I literally can’t hold myself together yet because it’s just too funny.”

The actors aren’t impersonating the original performances though, and some of the jokes have been updated.

“We are turning it into our own thing, so people shouldn’t expect just to see a carbon copy of the original episodes… otherwise they could just go and watch the real thing. We [also] improvise a little bit – we snatch a few jokes out of the air here and there – which keeps it fresh for us” Watts concludes.

“Gary and Tony are complete lager louts with few redeeming qualities and their women Dorothy and Deborah usually come out on top” Byrne says.

“The great mystery is they somehow stayed together, for six triumphant seasons, maybe there’s a message there somewhere, but you’ll be laughing too hard to care.”