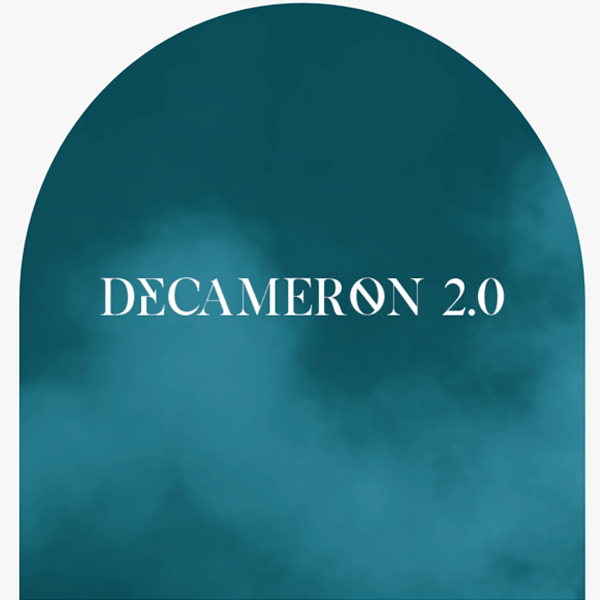 Those Who Make Sacrifices. State Theatre of SA and ActNow Theatre. YouTube. Jul 2020

Hiding from the Black Death in the 14th Century, a group of ten killed time by telling each other stories; ten stories each. This, famously, was the conceit of the Italian writer Boccaccio, and his ensuing book, The Decameron, was heralded as one of the finest works of Italian prose of its time.

In my time, it was a very naughty tome indeed, full of very ribald tales. It was even banned for a while. And then, ever so quietly, it drifted onto the back pages of literary history.

Now it is us hiding from a pandemic. It is us trying to entertain each other to pass the long, uncertain time during sequestration. And, the arts is reviving The Decameron concept with a vengeance.

Early on as we hibernated, there was a wonderful Zoom production called What Do We Need to Talk About from Richard Nelson’s Zoom Theatre in the US, for example.

But our own Mitchell Butel and State Theatre, with ActNow, have taken the idea to a higher level and made it a major, multi-faceted arts exercise devoted to the theme of life in a time of plague.

The first section of the South Australian Decameron was released on YouTube this week and there are more to follow. There are ten vignettes, each created by a different writer and performed, accordingly, with appropriately cast actors and directors. They each are aesthetically minimalist and filmed with expert production values. Each represents a solitary soul ruminating or perhaps fulminating over the status quo. They are, of course, as diverse as humankind and, between them, they tap into some of the most pertinent issues of our time: ageing, loneliness, race, and gender. There is something for everyone and more to come.

These self-contained cameo works each require a special “all” from the actors since they are not mere monologues but intense, closely focused solo pieces requiring absolute focus, characterisation, and outreach. They stretch a performer in the same way, perhaps, as audition pieces need to do, showcasing the nuances of expression and intonation.  And, by the new nature of solitary audience members focused on solitary players, they evoke an unprecedented scrutiny and intimacy.

To which cause, each brave actor has the support of a professional director from the two production companies.

It is unfair to single out pieces but one, of course, finds favourites.

Elaine Crombie, for example, in Alexis West’s Teahrnah, simply ravages the soul in a powerful, beautiful, and brilliantly balanced performance. She presents as an ordinary woman, a First Nations mum juggling the logistics of being nanna, managing kids, and going out from iso for the essential shopping.  It is a heavenly characterisation and a heavenly performance. One falls in love with her. And so very understated, so very fatalistically, as directed by the playwright, she tells the story. Mask on, careful driver.  And, oh dear, she really hadn’t thought about it. Disaster, as the cops pull her over. And here comes the phrase “I can’t breathe”. It is a perfect ending to the ten beautiful pieces.

It bookends nicely with Grace, the Decameron 2 opener written by Emily Steel. The inimitable Carmel Johnson plays Grace, a grandmother talking on Zoom to her granddaughter. It is a bit of a pep talk for the pandemic, a bit of grandma philosophy and positivity, and the story of her life, which turns out to be like the disappointing tales of so many women whose lives have been dedicated to making everyone around them happy. It is very well told by Johnson and directed by Mitchel Butel and it has a stunning ending.

Created by Sally Hardy is Wren, portrayed by Miranda Daughtry, a wonderful actress who, very nicely directed by Clara Solly-Slade, shines as the disillusioned vegan who has not managed to keep up with the fertile world around her. It is a bitterly funny piece, a hymn for and against veganism and performed with delicious ironic panache.

Another notable is Ben Brooker’s June which is performed by the elegant Caroline Mignone in warm black coat leaning against a wall in a particularly grotty warehouse setting. The prop on the scene is a bottle of hand sanitiser. June reflects on what’s left in life while her little city shop struggles against the emptiness of Covid retreat as the days crawl by. She misses the pavement population, Mary the mad evangelist, and ponders the place of faith in a pandemic. Brooker has made her exceptionally articulate and, although one can’t imagine a troubled shopkeeper saying it, it pleases the literary soul to hear the phrase “words which sluiced through her arteries”.

Among the other fine works, there are thoughtful tributes to gender dysphoria, Islam, racism, and health, as well as to the issues which surround us.  Jack Buckskin delivers a riveting Welcome to Country and later performs a piece by Kyron Weetra.

There’s a swag of directors and a wealth of talent. Out of the plague, it’s a starburst of creative excellence. And there’s more to come.