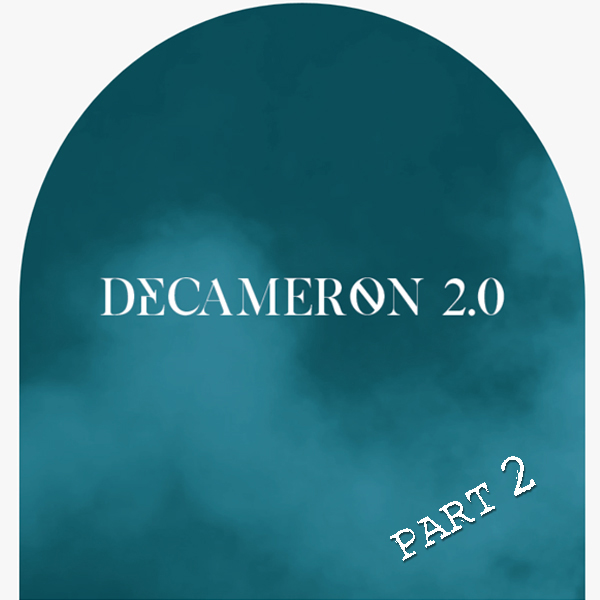 Episode Two: Those Who Find Happiness After Suffering

Boccaccio’s The Decameron was 100 tales long and, it seems, our State Theatre/ActNow Theatre counterpart promises the equivalent. This means we have just got going. There is a lot more hiding-from-the-plague storytelling to go, and suddenly, one is overcome by the incredible ambitiousness of this plan.

One also thrills at the audaciously generous spirit it asserts. It is a showcase, a playground, and a challenge for a strong cohort of South Australian creatives:  from Edwin Kemp Atrill directing the photography of this stream of professional online vignettes to a string of writers stretching their wings, as well as actors and directors.

This is historic stuff. Brave enterprise. The positive out of the negative. The covid collateral.

This week’s chain of tales is a little more up and down than the first set.

Where it is good it is superb.

Of course, there are horses for courses. Each item reaches out from a different soul to a different audience appreciation so generalisations are a bit dangerous.

From this critic’s perspective, the stand-out pieces of the ten include Sally Hardy’s Von, performed by Caroline Mignone and directed by Yasmin Gurreeboo. Von holds a cup of tea at an abstracted funeral gathering while she reflects over loss and the expectations of others. She dares to confide that she feels more relief than grief at this death. She should feel otherwise but, secretly, she just feels release. And so it is for many oppressed and dominated women. Mignone delivers both the character and the message with her usual professional aplomb. Voice and delivery are spot-on, as is Hardy’s brave script, capturing a decidedly tricky subject, and ending it with a simply delicious punch-line.

Most of these Decameron pieces so far have been meditative monologues but Jamie Hornsby’s Michelle has a proper plot. Michelle, played all in white by Miranda Daughtry, tells the tale of a stolen story. It is not unknown for writers to use the experiences of others but, here, it is pain which has become the literary commodity and Michelle expresses the sense of betrayal seeing the writer soaking up the spoils of success.  Clara Solly-Slade has given this work rather distracting direction, setting the character in a bed on the floor and allowing an assortment of camera angles. But Daughtry’s performance and the strength of the narrative surmount the distractions to make a potent and memorable piece.

One cannot and does not have to like all the characters in The Decameron.

For instance, J’Maine, written by Alexis West and performed by Jack Buckskin, is a man in jail for an act of appalling domestic violence. He’s First Nation and speaks in a torrent of coarse argot as he contemplates the importance of being connected to Country. He knows he is in for a long incarceration and will have to live with the image of what he did, but he hopes to stay clean and healthy in the future. It is a harsh little piece on a sadly familiar theme. Buckskin plays it strong and straight. Even though it strives valiantly for optimism, it leaves one sad.

Indeed, there is a lot of sadness running through these pieces. The old woman, Anja, written by Alex Vickery-How and performed by Carmel Johnson and directed by Mitchell Butel, reflects and philosophises on love and hate and the horrors of Europe during WWII.  Her description of Hitler’s followers and the silenced media is chilling and, of course, one sees the Trumpian parallel. The staging is a bit stodgy and the softly accented delivery is very measured. But the ending, oh, the ending; the strange ways that beauty finds its way into the darkest places.

Saba is perhaps the most animated character in this set. She is written by Nelya Valamanesh, performed by Manal Younus and directed, again, by Butel. She’s a here and now character and she has caught not Covid-19 but the perverse conspiracy-minded fake-news disease. To which end, she is played blithely smug and sensibly unlikeable.

Ellie by Kiara Milera is an odd piece and a hard performance challenge for wonderful Elaine Crombie. She plays an old chook in a dressing gown having a party post-mortem on the phone. It is filled with such everyday minutiae that one is relieved when the phone goes flat.

One is not sure that Rhys Stewart is the right person to play Ben Brooker’s Josip. Then again, it is a tough piece to play as dialogue. It strikes one more as a prose poem; lyrical, eloquent and full of richly beautiful turns of phrase, but not credible from a young person in a hoodie. Anna-Paula Jettick, written and performed by Arran Beattie is another oddity. It is a melange of interviews with drag queens.  Valerie Berry has written and performed Lucy with direction from Edwin Kemp Atrill. The direction is strong, less static than many, but the character is not.  Finally, there is Matt, written by Emily Steel and performed by James Smith. He’s an Aussie actor in New York, definitely a failed actor but full of a desperation of undying optimism. It is about audition pieces and Smith gives his performance very much the spirit of that very thing.

And there ends this week's ride of the ten.  The whole project is laudable and very challenging as monologue for the actors. State and ActNow have well used their time hiding from the plague.

If anything is lacking so far, it is levity.

The original The Decameron stories tended to be rather raunchy, heretical, daring, and funny.

We shall see if any of these characteristics emerge in the ensuing chapters.