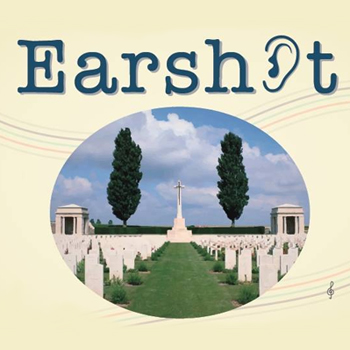 Earshot is a ballad opera with a unique music-based historical foundation to its subject; WWI and the musical instrument known as a phonofiddle, of which only two exist in Australia.

Director/writer Russell Fewster was bequeathed a phonofiddle by his late father. An instrument combining the length of a cello, strings played with a bow, and a horn base. It was fashioned in the trenches of WWI by an unknown soldier.

From this inspiration Fewster and Musical Director Richard Chew have written a book and score in which popular French music of the era and the sound of the phonofiddle serve a dual purpose; giving life to the spirit of the time and drive to the search of blind musician Sarah (Annika Hooper) who seeks the lost grave of her Grandfather on the Somme.

Sarah’s struggle is hindered and helped by a Parisian Priest (Rob MacPherson). What keeps her going is the music of the phonofiddle and guidance from the ghosts of dead soldiers.

Fewster’s direction is sparse and simple, on an equally sparse set design. The music is the central focus of this production, and that is tightly maintained and amplified by Hooper’s strong, driven character, supported in song by soldiers David Bailht, Brenton Shaw, Declan Hart and James Skilton along with nurses Lauren Williams and Hang Zho.

Projected film backdrops of Flers AIF burial ground enhance the ghostly, musical experience of the production immensely in which stage action followed on in film, takes the work to another plane entirely.

Earshot is an introspective, considered meditation on The Great War from a place that is deeply personal as it is universal in a quietly understood, reserved manner untrammelled by louder, brash expressions of national identity which do not much admit of humble human reality.