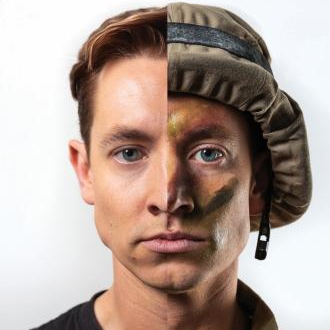 This is a consummate theatre work.

Within minutes of the play starting, the outside world retreats. There is just one reality: an austere barracks room occupied by four raw recruits.

Over the next 75 minutes, under a starkly effective lightscape, the daily conditioning of the young men reiterates in a ruthless rhythm.

Clothes off for bed. Clothes on for inspection. Packs on for drill. Packs off, rifles up, drill, drill, clothes off, clothes on. Discipline. One of their number, Perk, is slack and bolshy. Everyone suffers for his stuff-ups: twenty pushups; twenty more pushups. The voice of the unseen Corporal bellows orders and challenges. The soldiers bark back at the top of their lungs. They are being hammered into a fighting unit. They get it. They try to cover for the recalcitrant Perk. Small differences and abrasions, camaraderie, hopes emerge in their resting hours. Then the nightmare realisation of what it really means in what they call the “theatre” of war.

This Pamela Carter play brings the theatre of war to a theatre's stage with explosive effect. It is powerful theatre. It is a tight and feisty little play superbly mounted by Adelaide's bright new professional theatre company, Theatre Republic.

Corey McMahon’s star continues to shimmer as a thrilling talent among the city’s high-calibre directors. He hits the nail fiercely on the head here with impeccable timing from a group of expert, disciplined and fit young actors: Matt Crook, Rashidi Edward, Stuart Fong and James Smith. Artfully and strenuously they embody the diversity of characters who seek the army life.

The work is finely choreographed by Roz Hervey, the moods underscored by James Oborn’s apt sound and Chris Petridis’s dramatic lighting plot. Olivia Zanchetta’s name leaps to attention for the eloquence of the sparse, regimental set.

Between them, the production team defines Theatre Republic as a quality entity which has arrived to enrich the city’s arts world. In Lines, it provides high-impact entertainment with socio-political substance. It’s a must-see triumph.