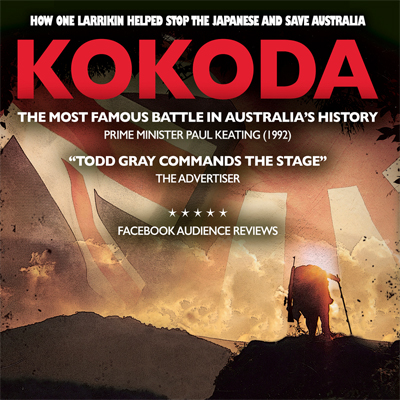 Many argue that the battle of the Australians against the Japanese in 1942 on the Kokoda Trail changed the course of the war, but it's certain our victory there helped to protect northern Australia from even greater destruction subsequent to the earlier air attack on Darwin. Detecting the lack of appreciation for its importance, former Prime Minister Keating promulgated the campaign as the central focus of war remembrance. Kokoda in the Fringe is a reprise of last July's world premiere. Playwright Peter Maddern and actor Todd Gray have also teamed up on a number of theatre projects in the past, and from my viewing of this show, it's a winning combination.

Our Private Morris Powell, played with aplomb by Gray, is first seen loafing around Melbourne while other men are getting shipped out to war. He and his mates join the 39th Battalion, and with little training, take the brunt of the initial Japanese invasion, and are right in there for the counter-attacks as the battle shifts up and down the track. Maddern paints a comprehensive picture encompassing the privations of our private, the squabblings of the commanders and the exhilaration of the fighting. Gray successfully transforms Powell from larrikin to a battle-hardened and weary digger through the action. Yet I ponder if the emotional quotient of the show could have been lifted by reducing the contextualising historical narrative and focusing entirely on Powell's on-the-ground visceral experience.

Gray's ockerism was superb and endearing, and fresh from the '40s. We have such reverence for our military heroes that it's impossible not to get over-excited about it, and in Gray's case, this was manifested by occasional over-rapid and indistinct delivery and overuse of a high, sometimes shrill register. Indeed, after the show when he spoke to the audience, I was surprised how resonant, deep and pleasant his voice actually was. There was a lot packed into Maddern's script and Gray energetically attempted to convey it all. However, while great at explaining things, his battle scenes were as wooden as his Bren (direction by Peter Maddern).

Josh Williams contributed an experience-enhancing soundscape of bullets and bombs. The short film excerpts from the campaign were very helpful. Ken Kurtz's costuming was spot on.

Pitiful that this lad compared his deadly duty to the Grand Final for Australia; such a boy. It breaks your heart.