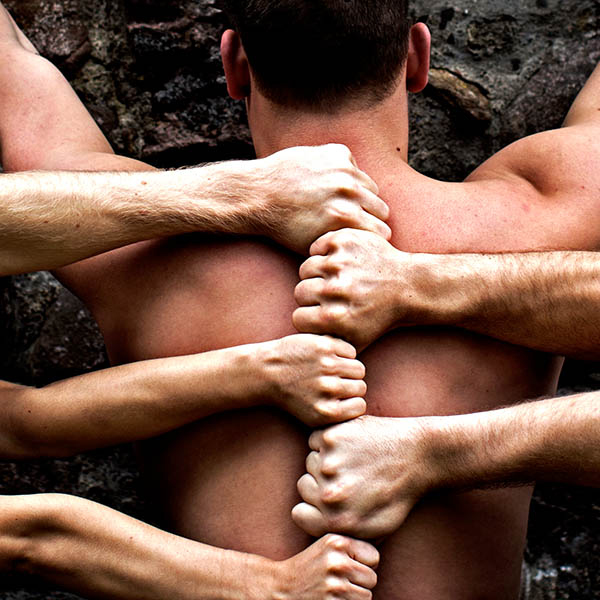 As the curtain lifts on the Dunstan Playhouse an odd, almost rehearsal-like, space is revealed with a hodgepodge of random items orderly arranged around the stage, the performers themselves lying amongst the organised chaos.

The random items – wooden poles, metal buckets, large rocks, a suit of armour, and items of costuming – are moved, removed, and switched and the players begin their acrobatic dance routine. Ascending to spectacular heights on each other’s shoulders they scale one another with absolute confidence - first two high, then three and finally four… the highest acrobat’s head almost touching the lights atop the proscenium arch. It is an impressive feat. It is a feat of great strength; the first in an 80 minute long barrage of exceptional circus skill, flexibility, strength, trust, and confidence.

The show continues with tribal-like rituals where sandy rubble is scattered in patterns on the floor. Circles, lines, mounds and geometric patterns are formed and the performers are almost instructed and controlled by the angle and direction of the patterns. They flip over it, wrestle in it, and throw themselves around with explosive energy.

There are representations of machines. Cause and effect. Perpetual motion and Newtons 3rd law. The human structures, tower over one another. The strength and agility one associates with the backbone is evident in panoply of images, movements, and forms.

The performer’s agility and stamina is beyond impressive. The trust they must have in each other and their absolute focus and understanding of limits is nothing short of spectacular.

This is a new kind of circus. It is understated. Humble. Introspective.

The work has been commissioned for the Adelaide Festival. The director, Darcy Grant, has envisioned a piece which he says “…examines strength. Honestly, ironically, and personally.” The production is raw, and it is evident in the staging, composition, and performance.

Elliot Zoerner and Shenton Gregory have composed a musical accompaniment which links the imagery taking place on stage, heightens the tension, lengthens the moments of awe-inspiring skill, and punctuates the drama. Their onstage performance of the music is equally dextrous, the two playing multiple instruments to create all manner of digital and musical effects.

Geoff Cobham’s design utilises laser technology in the lighting effects which is reminiscent of a bygone era dragged into the 21st century. Mirrors are used to spectacular effect and directional and shaped lighting draws focus to important imagery as it is played out by the performers.

The result is a spectacular 1 hour 20 minute production that whizzes by and leaves one feeling agog for the next GOM creation. It is easy to see why this is a multi-award winning company.

The performances continue for another 3 days. Miss it at your own peril.