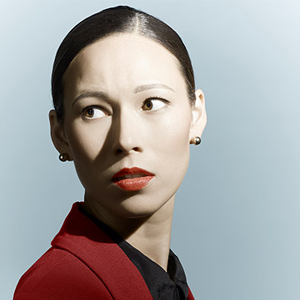 Thank goodness someone has written a play that shows the Chinese nationals to be the way they really are, or is it the way we think they are?  Or demonstrates in no uncertain terms what they think of us - koala-like loafers lazily lounging on a treasure of resources lacking ideals - or is this the way white Australians think Chinese nationals think about us?  Where sits the experience and the stereotype?

Kryptonite is a new Australian work co-produced by our state theatre and Sydney Theatre Company by accomplished playwright Sue Smith.  While the world premiere took place in the harbour city last month, the work was directed by State's very own Geordie Brookman.

Victoria Lamb's stage is designed with the modern idioms of bare and alienating, yet is fetchingly architectural (which means it's got style).  I loved the disappearing ink on the rouched silk-like backdrop.  Nicholas Rayment follows suit with harsh and focused lighting.  Composer DJ Tr!p (no, not a typing error) hones the edge further, and sound designer Andrew Howard gives it an ethereal effect.

Sue Smith chose to chop up the chronology in a way re-popularised by Quentin Tarantino - another technique that separates modern theatre from its proscenium stage forbears.  Sometimes confusing, I appreciated its value nearer the end.

Ursula Mills gives an excellent performance in the challenging role of Lian.  Her Lian, likely a creation of all of herself, Brookman, Smith, and Smith's sister-in-law, certainly was an incredibly detailed and nuanced rendition of everything I see in being Chinese - for example, her hard working impoverished student, her early peasant-like behaviours, her power woman period, frank judgments, clear thinking, passion, love of country.  Bravo!  Tim Walker provided no less verisimilitude and his transition from a prankster to a senator seemed the real deal.  Director Geordie Brookman made the years fly by, like the pages blowing off a calendar, with inventive blocking and creative scene changes, and not least, the performances he extracted from this great cast.

I was thrilled at the pace and the scope of this production, a real roller coaster ride called Australia's relationship with China, superbly executed and presented.  A time capsule of the times.

When: 22 Oct to 9 Nov
Where: The Space Theatre
Bookings: bass.net.au