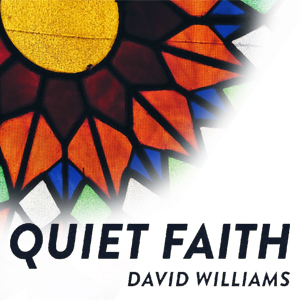 I have always considered the Vitals to be vital in the creation of new theatrical work in Adelaide, and they do so presently via three programs:  Incubator - a residency program for the creation of new performance work, Adhocracy - an annual amalgam of artists and audience, and Contemporary Communities - community-based projects partnering artists with non-artists culminating in a new work.  The latter sounds similar to what the dear, late and great Geoff Crowhurst used to do through Junction Theatre.

The documentary aspect comes from Williams' personal experience growing up in a church family, and through his interviews with twenty Christians from various denominations and with diverse ages and occupations.  With co-performer and collaborator, Ashton Malcolm, they mimic the intonations of the interviewees in expressing their testimony.  Indeed, they sought permission of the interviewees to perform their very words.  How great is that? Imagine being able to interview Willy Loman or Richard III in order to provide an authentic performance!

The result is a gentle and often wry reflection on your everyday church-goer, and Christian religion and social service provider.  But the first thing that will impress you is Jonathan Oxlade's fetching circular maze set in the middle of the cavernous Waterside Workers Hall.  The low walls of the maze, constructed of bleached plywood with a high level of craftsmanship, function as seats for the audience.  Above is a halo of diffused lighting thoughtfully designed by Chris Petridis.  Whispering voices and vespers penetrate the space via eight enormous trumpet-like speakers (sound design: Bob Scott).  An exceptionally credentialed creative team has been applied to this project.  The design was sculptural/architectural, take your pick.

Williams and Malcolm play the various roles of social workers, pew sitters and deacons.  You are immediately captured by the devotion to service thus expressed, and will identify with the political views - from "What is Abbott doing?" to "Of course, if you belong to the church you voted Liberal."  Williams and Malcolm sweep amongst the audience and look you in the eye with their monologues of verisimilitude.  Indeed, the script is certainly most real, with all the halted sentences and changes in thought and expression that we do when we explain or converse.  This worked extraordinarily well 90% of the time.  They also sang devotional hymns, and people joined in for Amazing Grace and The Lord's Prayer.  Hell, I grew up with 10:30 Sunday mass at Our Lady of Sorrows, so I knew what Williams was getting at.

I was especially moved with the last scene where a couple of ministers explain how they gave baptism to a stillborn - against doctrine - to provide the requested comfort this would give the parents.  They posit the question:  If we can't provide compassion and assuage grief at this time of need, what use are we or our church?

Quiet Faith is hallowed ground, a little bit like going to church, and a powerful voice for the faithful who actually practice what they preach.  Whether you are a full-blown atheist, one of the flock, or a complete hypocrite, you will not leave the same as you entered.

PS Ashton Malcolm says she is playing Desdemona in State Theatre's November production of Othello, and I wouldn't miss that, either.

When: 8 to 19 Oct
Where: Waterside Workers Hall
Bookings: trybooking.com