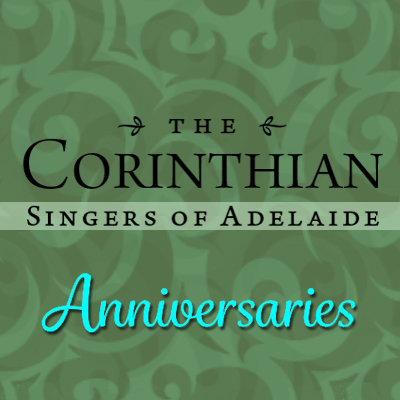 This was my first Corinthian Singers concert and I now wonder why it took so long. This community choir is a gem, and Anniversaries displayed the breadth of their talents despite the last throes of winter ills conspiring to make the task a little bit harder.

The church has a warm acoustic that suits languorous harmonised melody lines but the longish reverberation time is a little less forgiving for rapid staccato singing. This contrast was evident from the start in the performance of Danny Elfman’s Alice’s Theme from Alice in Wonderland. The first two stanzas were beautifully clear and articulated but the up-tempo third stanza became blurred and less satisfying. Les fleurs et les arbres suffered similarly, but Calme des Nuits, both by Saint-Saëns, was precise with near perfect French pronunciation. Bravo!

The concert comprised some eighteen songs sung variously in English, French, Latin and Russian, and they all had a tenuous connection to an anniversary of some sort: anniversary of the death or birth of the composer or lyricist, or, amusingly and exceedingly tenuously, an obscure anniversary celebrating the time since the composer started to learn the piano! Musical Director Alistair Knight revelled in the humour of such contrivances but this did not distract him from the main game, which was to let eleven (not twelve?) voices and organist/pianist Peter Kelsall bring both secular and religious music to life. And that he did.

The programme mostly comprised songs from the mid-1800s onwards, including one composed by Knight himself – a setting of the hymn Ubi Caritas. It was contrasted with an abridged setting of the same hymn by contemporary Norwegian composer Ola Gjeilo (who is perhaps best known for his composition Dreamweaver for choir, piano, and strings). The juxtaposition was a high point of the concert.

Many songs on the programme were sung unaccompanied, and the highlight was the hymn Mother of God incessantly in prayer composed by Rachmaninoff. Impressively, it was sung in Russian and the audience was suitably in awe.

This was an almost perfect way to spend seventy-five minutes on a Sunday afternoon.