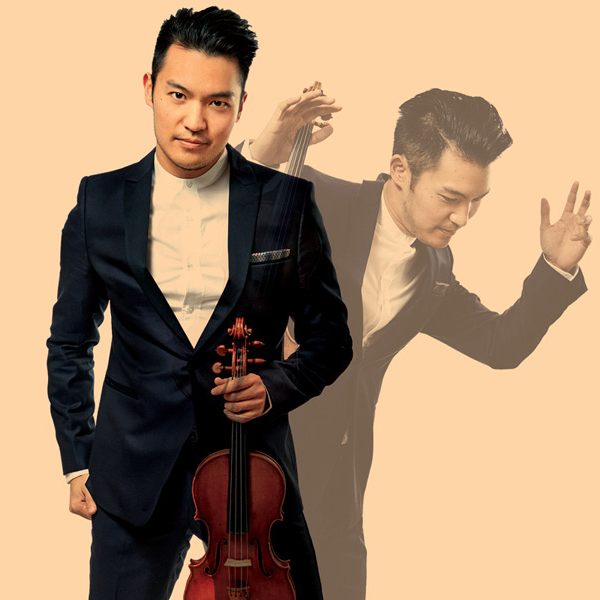 Ray Chen is to the violin what Franz Liszt was to the piano. He is technically accomplished (almost frighteningly so), mesmerising to watch, astonishing to listen to, provocative, good looking with piercing eyes, and is a consummate performer and communicator. He’s the complete package and his fan base runs from the young to those in their ‘sere and yellow’.

Chen strode onto the Adelaide Town Hall with almost the swagger of arrogant youth. With the 1715 ‘Joachim’ Stradivarius violin firmly clutched in hand and accomplished French pianist Julien Quentin at his side, Chen cut a fine figure. Sharply dressed in an Armani suit (one of his sponsors no less), glistening patent leather black shoes, Nehru-collared crisp white shirt and edgy coiffure, Chen’s physical appearance proclaimed he was here on business and with something to say.

And say it he did.

Beethoven’s Violin Sonata No.1 is a sonata for violin and piano – they are partners in a dialogue in which dominance and leadership switches backwards and forwards between the two instruments. On many occasions Chen allows the violin to almost imperceptibly emerge from the piano’s line (as if he were playing the piano’s part) to lead the conversation and, with a knowing smile from Chen, Quentin instinctively allows the focus to shift to the violin.

Grieg’s Violin Sonata No 2 is a relatively early work (written before his Piano Concerto) and brims with Norwegian folk melodies and rhythms. Grieg once admitted that the composition struggles with the constraints of the classical sonata form, but the result is nonetheless pleasing. It was written during his honeymoon (!) which may explain the almost ecstatic joy of the melody driven allegro animato third movement, and Chen and Quentin’s outgoing and expressive performance allows its inherent fun to reach out to the enthusiastic audience.

This effervescent affirmation of life also features in Hindson’s Violin Sonata No 1. Hindson attended the concert and spoke briefly from the stage about the composition explaining why he gave it the soubriquet ‘Dark Matter’. He explains that the piece was written during the final days of his father’s life and as he reflects on life itself he reasons that the value of a person’s life can be measured not in absolute terms but by the impact that it has had on others and the world around. It is the same way that dark matter pervades our universe and is unseen, except for the lasting effect it has on other things. And so the sonata explores these imponderables. It begins with a serenely contemplative first movement that is introspective and almost reminiscent of a Brahmsian lullaby, except that it develops and as the layers are slowly peeled away something quite deep and ethereal is revealed. Meditation is shattered by the final and second movement which features enormous leaps, extreme shifts from the very softest sounds to forte explosions, waves of rolling chordal accompaniment on the piano, and savage pizzicato on the violin. It is as if the very fabric of space-time is being torn asunder. The composition was commissioned with Chen and Quentin in mind to give its première, and they may very well have claimed it for themselves and laid the standard for years to come.

The second half of the program features de Falla’s Suite Populaire Espagnole, in which Chen and Quentin’s playing almost mimics the human voice at time. Chen is almost haughty in the Canción and Jota movements, with flourishes of his bow and flashing eyes raging at his environment. It is as if he is fighting against being transported by the music to some other place. Throughout Quentin was the consummate partner who augments and refines the overfall soundscape.

Chen and Quentin thrill the audience with their own arrangement of Vittoria Monti’s ever popular Csárdás. It includs foot stamps and emulations of bird twittering! Chen and Quentin have the large audience clapping along (almost in time!) and finally exploding into euphoric applause at the end.