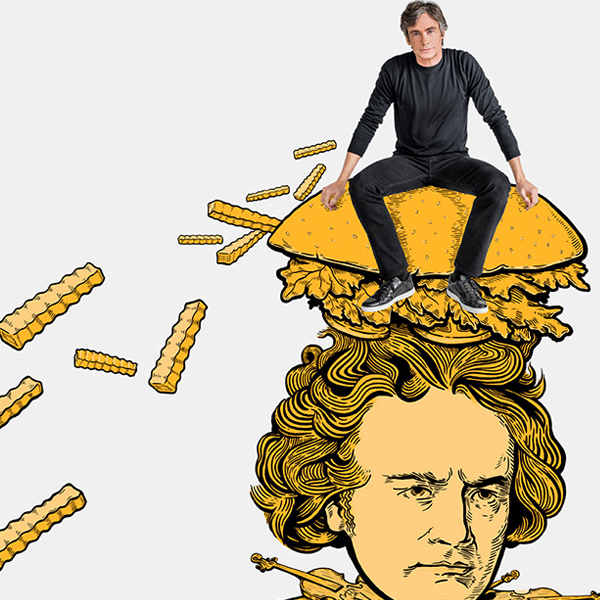 It is a sandwich with a Widman filling, but the main substance and real enjoyment is in the Beethoven bread.

The current national Season concert presented by the Australian String Quartet features Beethoven’s Op18 No 3 and Op 135 string quartets – his first (despite what the numbering might suggest) juxtaposed with his very last – and Jorg Widman’s String Quartet No 3.

Widman is a contemporary German composer, musician and conductor. As a composer he has a not unimpressive oeuvre and discography with him as instrumentalist or conductor. Since 2017 he has been the Edward Said Chair and professor of composition at the Barenboim–Said Academy in Berlin. His third string quartet, known as the Hunting Quartet, dates from 2003 and is something to be enjoyed as much by seeing it as hearing it. It’s a scream, literally! The music is punctuated by blood curdling whoops and screams from the musicians and the swishing of their bows, and importantly, silence. This is programmatic music and focuses on the excitement and ultimate terror of the hunt. Visually it is fascinating to see the various ways the musicians extract very strange and unsettling sounds from their instruments. If unseen, and only heard, and without knowledge of the programme, the composition is much less effective. To one’s ear, the composition is not entirely successful in appealing as pure music, but the audience receives it with great humour and appreciation.

The Beethoven however is a different kettle of fish.

Beethoven wrote sixteen string quartets and they can broadly be categorised into three periods. The Op18 No 3 comes from the earliest period and is the third quartet he ever wrote. His most popular quartets are from his middle period and include the Razumovsky Quartets. The quartets from his latest period are amongst the last compositions Beethoven ever wrote and they are amongst his greatest. They are intellectually demanding and distance themselves from the romanticism of the middle period. They are also substantially less popular from the others, but, in the hands of the right musicians they have an almost unchallenged transcendence. The Op 135, Beethoven’s last quartet and last complete composition, is a prime example of just that, but it is also different.   At times it seems ethereal and playful. Its texture is often sparse and it has a simplicity and translucence about it (to the ear) that gives it great profundity. The ASQ manages the dynamics with great empathy and allow the mix of anguish, joy, mischievousness and friskiness to come through. The Op 18 No 3 is altogether quite different. It is much more reflective of the quartet legacy of Haydn and Mozart, and the ASQ deliver it with precision, taut vigour and humour.

Andy Packer, of Slingsby Theatre Company fame, was commissioned to ‘design’ the setting for the concert. He located the ASQ on a circular mat in front of a large off-white backdrop. A series of footlights are trained on the musicians that created larger-than-life jarring shadows of the players against the backdrop and the side walls of the Town Hall. The concert begins with a recitation from Beethoven’s Heiligenstadt Testament to underline that the Op135 was written at a time when Beethoven was totally deaf, and as it concludes the members of the ASQ one by one move to their chair and the house lights dim to leave the auditorium in darkness save the warm glow of the footlights on the musicians. This could have all been highly effective if it wasn’t for the tackiness of the backdrop, which looked like a series of bedsheets clumsily sewn together. It becomes a distraction. But the Beethoven put all that aside.