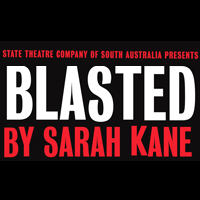 Vile!  Disgusting!  Filth!  Yes!  This play is full of human cruelty that I don’t care to see.  No, I’m not hiding my head in the sand, but I get enough from the news and I like to go to theatre for a bit of fun, not to have my face rubbed into it.

It’s best to put the action of the play in context.  English playwright Sarah Kane was only 24 when Blasted, her first play, was performed at the Royal Court Theatre Upstairs (London) in 1995.  The 1000th day of the siege of Sarajevo was 28 January that same year.  In Blasted, Kane conflates domestic violence and rape with sexual violence and other multiple horrors employed as a weapon of war, in two scenes using an inventive segue from one to the other.  The base sex of the first act may not have been garden variety, as I could be forgiven for thinking that the relationship was between an uncle and a niece, but I tell you, that is by far not the worst thing to happen in this play, no sirree.

The play is totally misandrist.  The two men are animals – bigoted, violent, rapists, vengeful, hateful, misogynistic, dysfunctional, use a lot of swear words, basically not nice.  The female role is a vegetarian, totally anti-violent, innocently handicapped by some sort of propensity to fits, naïve.  Clearly men are the problem and, well, no denying that I suppose.

Given the copious acts of violence to portray, Netta Yashchin’s direction is rather pedestrian.  It is very difficult to stake a claim with the characters and therefore empathy is far away, and the violence is over exposed instead of gut wrenching.  The characterisations don’t build into anything.  This is also partly due to the dialogue which is a load of clipped chit chat.  In fact, the play would not bear any additional misunderstanding if hardly any words were spoken.

Kane does make many superb points.  In the dog-eat-dog world of male violence, the perpetrator of the first act becomes the victim in the second.  That the same civilians who perpetrate domestic violence become the animals of war.  The play is rather poetic - sucking the eyes out of someone’s face reflects the torture of Edmund in King Lear and Kate’s ministrations to Ian in the epilogue were reminiscent of the epilogue in The Grapes of Wrath - it’s just someone else’s poetry.  Blasted also means getting wasted on narcotics and maybe Kane wanted us to think we were blasted on endemic violence, and sexual violence in particular.

Wendy Todd’s set is quite fantastic as a modern hotel room is transformed into a blasted one.  Mark Saturno’s burst as the intrusive war weary ethnic cleanser was very impressive.

When: 5 Oct to 13 Nov
Where: Dunstan Playhouse
Bookings: bass.net.au