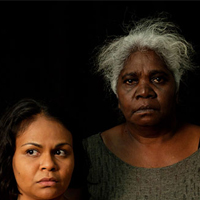 An Aboriginal woman has gone mad collecting the souls of the young men on her lands that have fled their existence by their own hand.  This is the story of how centuries of interference and wrongful indoctrination, the corrosive thrust of modern society on ancient practices, and inter-clan squabbles over a paucity of resources when there should be plenty can tip a young man into oblivion with a final, additional and personal disappointment and humiliation.

Stephen Page, famously the director of the 2004 Adelaide Festival, dancer, choreographer, director of Bangarra Dance Theatre since 1991, and award-winning contributor to the arts for numerous other reasons and activities, worked with writers Kathy Balngayngu Marika and Wayne Blair and then workshopped the piece in Arnhem Land to further stamp its authenticity.

Under the moon-reflected light of designer Damien Cooper, the broken containments of civilisation are symbolically reclaimed by the spindly bush (set design – Peter England).  The issues are relayed mystically in dance with Steve Francis’ compositions, cryptically by using sparing English amongst Aboriginal dialogues, and through the realism of performers expressing their very selves.  It’s a sad tale and often a slowly told one, presented like a dream or more like a nightmare, but deeply touching, full of ritual and realism.

This isn’t human trafficking in Hungary like in Hard To Be A God, or Scottish razor gang violence, as in Fleeto, but it’s happening right here on our own red earth in the vast space between our beaches and cities.  It’s another world and it’s heart-breaking.  Bravo!