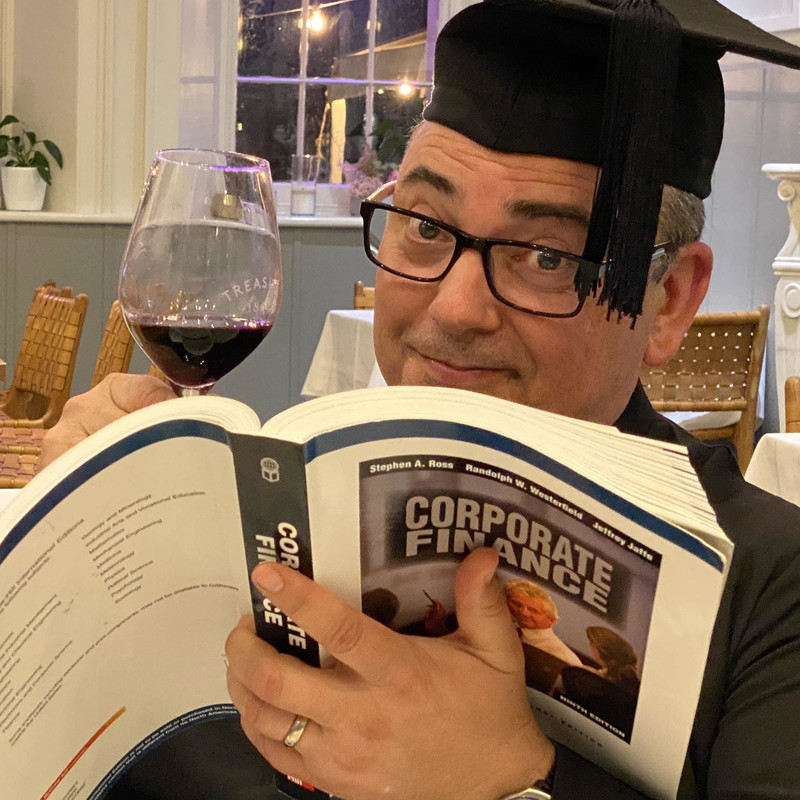 Well, well, well. Suddenly, we have an academy of specious absurdity and, in a torrent of eloquent explanatory bafflegab, it all makes absolute sense. If you don’t think too hard.

It is run by a Professor Longsword of the MBA School of MBA and he will do the thinking for you. He may be familiar to Fringe-goers from a former season with Becky Blake in the show Innuendo Everywhere. Then, he was a mere headmaster, albeit something of a disciplinarian. Now, in his magnificently tailored flowing academic robes and snappy mortar board, he has reached realms of far greater power and authority and he is almost beneficent in his munificence.

His course for the Fringe is, as advertised, a lunchtime Masters in Business Administration. Eligibility for the course seems dependent upon the ability to wine, dine, or perchance coffee at gorgeous Treasury 1860 and, indeed, having something of a taste for Longsword’s pun-lectable long words. A sense of humour helps, too.

Then again, one seriously must pay attention to the good professor since what he has to say about business administration, education, and academia is actually intensely clever. The devil is in the detail.

Of course, the Professor is marketing guru, standup comic and man-about-town Steve Davis and, in writing this show he has collaborated with his director Glynn Nicholas. Both men are seasoned in the humour department and old enough to have wide terms of reference. Hence this absolutely silly show is full of really clever and apposite commentary.

Not only but also, it is the most refreshingly original show in the Fringe. A lunchtime MBA?  What a concept. In itself, it makes a pithy wee jab at the ubiquity of MBAs. And if audience members don’t have an MBA, Professor Longsword provides them on the spot, well, on graduation from the performance.

The professor is assisted by one Paige Turner, a woman with an epic laugh. And, among segments of the show, they turn on some audience participation with marketing research with novel foods. Oh yes, they’ve thought of everything.

And, while one has had a good laugh at the expense of academic pretensions, one also has been provoked to quite profound depths of contemplation. For instance, this critic may remain forever deeply concerned at how on earth to leverage the value of a paradigm shift.