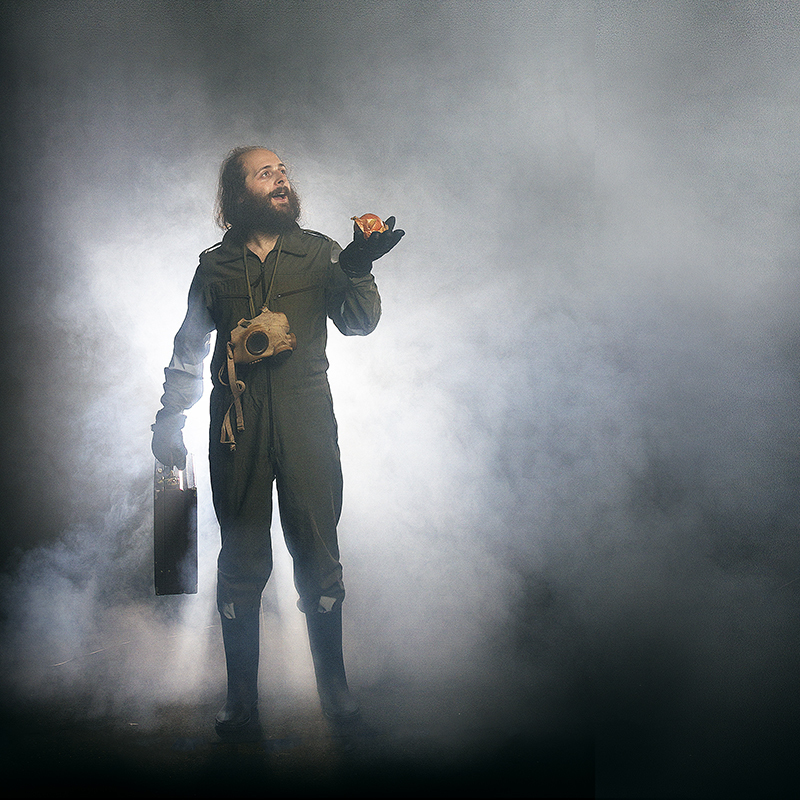 There has been a contagion of end-of-the-world reflection in the Adelaide Fringe and Festival. The Festival’s opera was a requiem for the planet, and “me” was included in the grief. There was a lot of discussion about the social damage from fascism and neoliberal economics at Writer’s Week by authors from around the world. And that’s just the arts. The real world was abuzz with unprecedented bush fires, incompetent leadership, coronavirus panic, unsustainable financial rescue packages, and tanking share markets taking people’s pensions south.

Welcome to Victor Bravo’s broadcasting studio. A lone character is surviving in a post-apocalyptic world by pretending his onions-in-a-blender drink is a banana milkshake while he reaches out via what he suspects is the last radio station in the world. You will hear echoes of Good Morning, Vietnam – a past-apocalypse.

Comedy writer Ben Volchok cut his teeth at the Melbourne University Comedy Review Board and finally comes to Adelaide with his absolutely stunning one-man play. In a cluttered and claustrophobic homemade radio studio, he brews his off-beat sense of humour with climate change anxiety to create his VB – Victor Bravo.

The play’s construct is beautifully simple and brilliant. There is a world outside the door upstage that we can only guess at with increasing anxiety while VB drip feeds us the details. He collects onions, reads notes from listeners and takes their phone calls. Everything is happening in the present as opposed to many one-person play concepts where the past is recounted, or the character needs to tell us what he/she is doing. VB is actually doing it, every minute. He uses a broadcaster’s microphone ensuring a fair hearing for the audience. It’s a shining gem of real time action.

The opening commences with a sound track of ambient noises in the dark. I forgot how powerful this stage technique is in setting mood and mystery. Indeed, the control of disturbing ambient sound overriding an eerie silence is a powerful component of the production, which unfortunately was compromised during a key moment by the tumult from a coeval show in an adjacent space. This was a disturbing intrusion that I hope the theatre management will address.

The uncertainty and loneliness of post-apocalyptic existence permeates the action, but it is foiled by admiration for VB’s resilience obtained through humour and memorabilia. The moment I finally comprehended VB’s real situation, I was overcome with empathetic sadness. Upon meeting Volchok whilst existing the theatre, I was still so choked with emotion I could barely utter my thanks for his marvelous and powerful creation. Double Bravo!