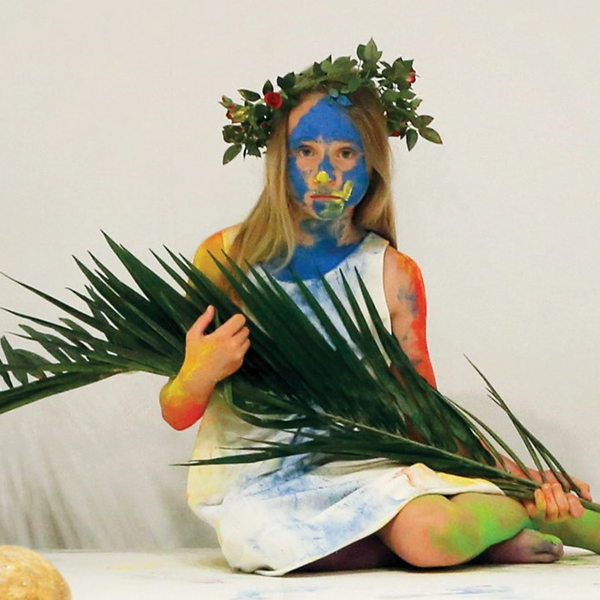 Requiem is not only a performance of Mozart’s famous mass for the dead. Director Romeo Castellucci has augmented it with other lesser known compositions by Mozart and bookended it with two anonymously composed plainchants. For those who know and love Mozart’s Requiem, the interpolators are immediately obvious as soon as they heard. But, there is a coherence to the augmented work and it becomes more than just a tribute to the dead: it becomes an homage to the ever changing cycle of life: birth to death, creation to destruction, evolution to regression, order to chaos.

Castellucci’s Requiem is audacious and has to be seen to be believed. It is ingenious in its conception, and astounding in its performance. The core to its success is the use of striking visual imagery, a lot of which is created in front of our eyes, literally: the large white light boxed stage is abstractly painted by members of the cast; the stage is scattered with soil out of which emerges early man; a forest setting grows; distinctive costuming poses questions but with no obvious answers; an abstract crucifixion; a car wreck and crash victims. Over this graphic celebration, Mozart’s music plays and the Requiem is sung in Latin and German. When one bothers to read the surtitles, one’s mind inexorably tries to draw connections between the images on stage and the sung text. One’s conclusions do not matter. It is ultimately a very personal experience and is driven by the human mind striving to make meaning, as it is wired to do.

One meaning is however patently clear. The span of human existence – right from its evolutionary precursors – is associated with creation, technical accomplishment, and eventual destruction. From the start of the performance to its conclusion, a sequence of words are projected across the rear wall of the stage box that name things that are now extinct – things from the natural world, things from the man-built world and, philosophically (and troublingly) things that might become extinct (such as “me”, “the word me”). It’s a disturbing list, with some things very close to home. The final projection was ‘28 February 2020’ — the date of today’s performance.

The production ends with the destruction of the entire set: a metaphorical end to the world. It is an awe-inspiring and breath-taking sight to behold. It simply must be seen. And out of death and destruction emerges new life, and the conclusion is a touching beautiful moment.

The programme notes suggest that Castellucci has a lead hand in nearly every aspect of the production: direction, set design, costume and lighting design. His hyper creative mind has enacted a unity and lucidity on the entire production.

Choreographed movement by Evelin Facchini is a key production element, with everything carefully staged. The ‘dance’ is not precision balletic movement – it is not meant to be. It is suggestive of changing mood, intention, and sophistication. It is highly effective and communicative – it adds to the whole, it does not try to become a focus in itself.

There are numerous ancillary non-singing cast members taken from local ranks who contribute to crowd scenes that make provocative and powerful images. They are sometimes naked but their (and the audience’s) modesty is protected by the strikingly executed chiaroscuro lighting.

The Adelaide Symphony Orchestra plays at its customary high standard (with the minor exception of some modulating horns in the opening bars). Conductor Rory Macdonald sets a comfortable pace that allows the very fine chorus to create and maintain the most beautiful of tones. Nothing is rushed, and everything is exquisitely articulated.

The four international principal soloists – Siobhan Stagg (hailing from Australia), Sara Mingardo, Martin Mitterrutzner, and David Greco – sing with great control and no affectation or unnecessary embellishment. Like hand in glove, their individual voices perfectly suit the music. Boy treble Luca Shin is angelic, and sustains musicality and clarity even in the softest moments.

The costuming is highly effective, and ranges from unisex monochromatic outfits to colourful folk-styled costumes, and abstract forms that, on occasions, suggest alterative interpretations for the sung text. Again, this production is very much about individuals grappling to create their own meaning and not being confined to the traditional interpretation of the text.

The genesis of Mozart’s Requiem is surrounded in controversy: how much of the music is actually Mozart's? Mozart was commissioned to write a Requiem mass, but died before he could finish it. It was then worked on by Joseph von Eybler and subsequently completed by Mozart’s student and assistant Franz Süssmayer. Mozart’s wife then passed it off to Count von Walsegg, who commissioned the work, as Mozart’s own work. Ironically, Walsegg was most likely intending to pass off the piece as his own composition to commemorate the death of his wife!

When Mozart died he had completed only the first six movements of the work, the eighth and ninth, and a fragment of the seventh out of a total of thirteen sections. The extent to which Süssmayer relied upon Mozart’s instructions is not precisely known, and a number of alternative versions of the Requiem have been subsequently developed by musicologists (e.g. Prof Michael Finnissy in 2011), but the Süssmayer version is the one most often performed, as it was tonight.

Regardless of who wrote what, Beethoven is reputed to have said that ‘If Mozart did not write the music, then the man who wrote it was a Mozart.’ High praise indeed. It is a fascinating story, about which much gloss was added in the acclaimed 1984 film Amadeus.

It has been suggested that even though Mozart’s Requiem was commissioned, he wrote it as if it were his own requiem, for he knew his health was failing, his death was imminent and this would be his last composition. This perhaps explains why it is thought the dying Mozart gave Süssmayer detailed (verbal) instruction– one final struggle to finish it and ‘get it right’. Perhaps Castellucci had this in mind as he conceived the staging of his version of the Requiem: that we as a species write our own Requiem (and that of other species and things), wittingly or unwittingly, but in the end it is really beyond our absolute control.

This production is pure theatre, and it is magnificent.