Two Jews Walk Into a Theatre 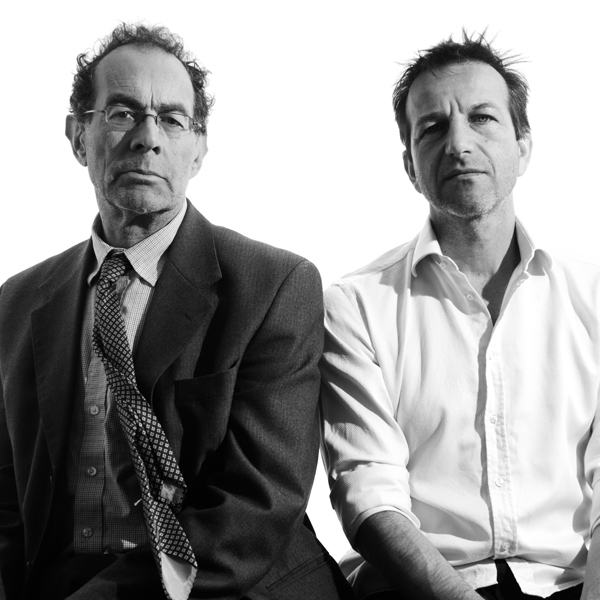 The Two Jews are actually sitting in the theatre, watching with studied indifference as a full house Adelaide Festival audience files its way in from the jam of an epic foyer queue. Their performance premise is that they are waiting in the foyer for a show and that they are rather early. They also posit that they are their own fathers, that their autobiographical references are really about their sons who bear their names. Just to be tricksy and keep the audience on its toes, one assumes.

In front of them on the stage is posted the biggest cheat sheet in history; running order and cue reminders writ large on huge white cards.

Brian Lipson, experimental theatre legend, and Gideon Obarzanek, choreographer extraordinaire, are semi-retired from public life. Lipson lives in London and Obarzanek in Melbourne. They get together to perform tales from their lives as a festivals party turn. It’s a charming concept and quite irresistible to audiences. Hence sell-out houses.

The two Jews have crafted the show so it looks as if it is really not a lot of bother. They have long silences, tell funny stories, snipe at each other, via the references to their sons, have more pseudo-awkward silences, and have something of an all-out row over the State of Israel whence came Obarzanek. This is as refreshing and enlightening as it is quite shocking. It really pins one’s ears back. But it is a reflection of the intelligence and courage of these two high achieving men, unafraid to balance a program about life in showbiz with some fierce rubbing of a raw old nerve. One tips one’s yarmulka, so to speak.

Lucy Guerin must be in there somewhere, directing those meaningful pauses, just as she has choreographed their finale, a singularly esoteric dance piece performed to an uncomfortably loud electronic droning sound. While the movements are interesting and aesthetic, that noise is profoundly puzzling.

Thus is this a particularly offbeat Festival offering from a couple of arts pinups who happen to be Jewish. Vunderlekh!