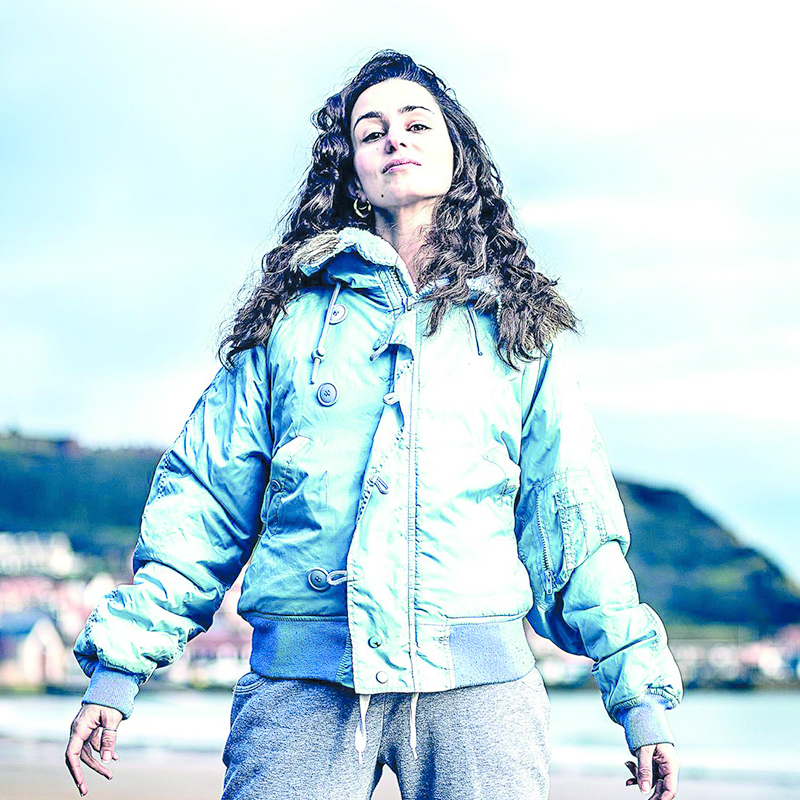 Naivete, stupidity, vanity, and inadequacy; many are the reasons schoolgirls find themselves pregnant and rarely do they find a happy chappy willing to take on responsibility for unwanted progeny.
Hence Yasmin’s utter anguish when her pregnancy test is positive. She’s a vapid Scarborough teen, a bit trashy with low self-esteem and an alcoholic mother. She knows she’ll have to go it alone.
No end of education has slowed this sad phenomenon. It has transcended generations. It is all around us. These ubiquitous schoolgirl single mums even sustain cable TV series.
Now, with a play written in the UK by Christopher York, the theme is re-iterated as a one-woman drama.

In the blackness of Holden Street’s Studio Theatre, Yasmin is spot-lit on a static playground roundabout.  This is her arrested childhood, her cruelled innocence. She writhes, she leaps, she proclaims, she has sex with a DJ and gives birth on the box core of this structure. She paces around it, darts around it and lurches around it as she swings through character changes, fleshing out the unkindness of a tough working class world and the psychological acrobatics an ill-starred teen must be able to perform to stand against the tide of her own misfortune. Love sneaks in for baby Jack, but it is serrated by regrets and fear of dispossession.

London actress Serena Manteghi embodies this hapless girl, giving her a strident, shrill voice and a strong Yorkshire accent. Her delivery is so piercing and rapid-fire that one often struggles for clarity. She feels like Julie Walters on steroids. She seems inexhaustibly frenetic.  Volume is her weapon. She assaults the audience with her pain and anger. She shouts. She screams. She confronts the hearing as much as the emotions. Hers is not a performance for sensitive ears.

Manteghi is lithe and lean and fit, wearing gym gear, swearing and flailing against the onslaught of Yasmin's plight. She has a wonderfully elastic face which she contorts into the characters of Yasmin’s world, into crude sods and sneering contemptuous outsiders. Her transformations are striking.

The playwright has given a classical edge to Yasmin’s tragic tale with threads of poetry and has equipped Yasmin with the symbolism of Icarus and Dedalus as she rallies to the values of motherhood.  Ah, for a rocket to the stars.
The power of human optimism finds a path and little Jack is perhaps born to be her saviour. Or not. It is a tough, unsympathetic world out there.