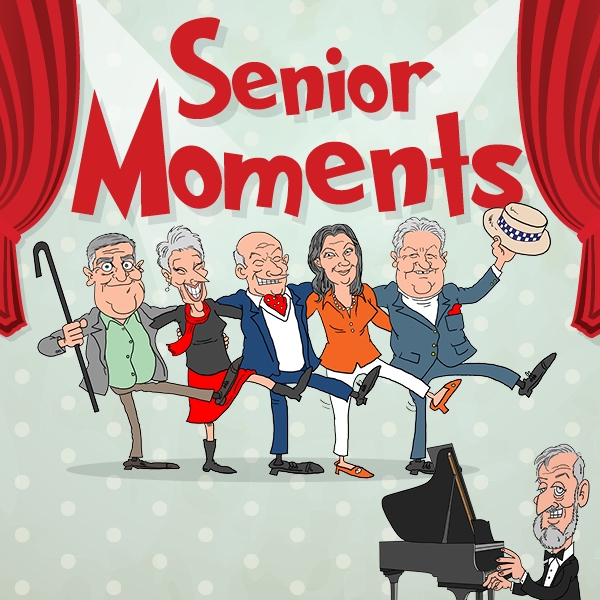 Seniors were so keen not to miss a moment of Senior Moments that three quarters of an hour before curtain, the Playhouse foyer was utterly jammed with balding old gents in check shirts and groomed grey grannies in floaty tops. It was like swimming through geriatric jam to get to the box office. But, there is one big plus about a full house of early birds. As front of house staff avowed, late comers were not interrupting this show.

Senior Moments is a nice, meaty piece of old-fashioned revue theatre. It is 90 minutes of skits about old people and getting old. That cast members are reading their lines from scripts seems perfectly normal. Much of the show is about forgetfulness. It is also about changing values and political correctness. Making the point about political correctness turns out to be politically incorrect. But old people remember old fashioned bigotry which seemed devoid of rancour. They are puzzled by today’s extreme sensitivities. One of the best skits of the show is focused on this theme. It is called No Need and it consists of those two beloved Australian stars, Max Gilles and John Wood, sitting at a bar table pondering the way in which people simply did not talk about sexual mores and gender issues back in the 1950s. There was “no need”. It is a profound piece of observation and, of course, it comes with a punch line. There are plenty of those, not all equally terrific, for that is the luck of the draw in revues.

But what a fabulous cast. There’s the eternally vivacious Benita Collings, the living legend of Play School. In this show, they parody Play School as Old School, of course. Everyone has grown up. Benita conducts proceedings from a lectern. A scatter of skits ensues.

Distinguished stage and TV actor Russell Newman is there with, oh, what a lovely voice. Kim Lewis is the sparkling, leaping youngie among the oldies. But there also are two actual juveniles, Christian Barratt-Hill and Emily Taylor, playing everyone’s offspring. They support nicely and also stay discreetly in the background.

Onstage more than anyone else is musical director, Geoff Harvey. He’s an octogenarian these days and looks so very frail that one thinks he is just going to drop onto the keyboard, until he tinkles those ivories. Whacko. He keeps up a demanding musical accompaniment throughout the show and also, just for a bit of flair and virtuosity, he plays two substantial medleys.

Of course, it is John Wood and Max Gilles who steal the show. Both have magnificent voices. Max may have aged but his comic timing hasn’t. And, oh, it is so long since the State Theatre days when the magnificent Wood regularly graced our stage. He plays the naughty septuagenarian and he gets to tell some dire groan jokes. He’s on the ball and a generous performer and he does not refer to notes. The production, directed by Angus FitzSimons in a dignified, conservative style befitting the seniority of its stars, has been written by FitzSimons and his old radio/tv scriptwriting partner, Kevin Brumpton. One imagines they also wrote the program. It is a hoot and a very worthy free souvenir of a night of giggles and guffaws for all those early bird audience seniors who have probably forgotten all about it by now.