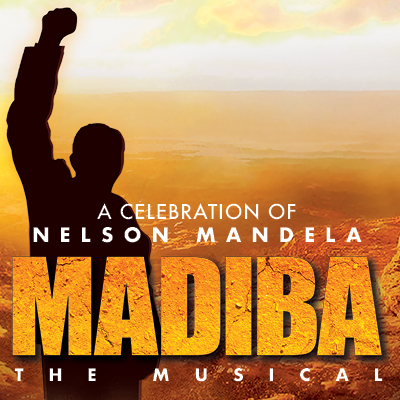 A bio-musical based on the life of the beloved South African anti-apartheid hero Nelson Mandela would seem to be a tremendous idea, but musicals are a tough genre. Despite all the good energy in the world from a vigorous song and dance cast, this touring production struggles to find its mark in a sea of earnest good intention.

The great man’s life is sketched out in episodic scenes and expressed through torrents of terrible rhyming couplets. Good voices sing out the night, sight, right, fight lyrics blighted by a very average score valiantly well played by Michael Tyack’s fine band. The talent is all there on stage, working so hard. But the result reminds one of school musicals. It’s all so ingenuously derivative; Jesus Christ Superstar meets Stomp, minus memorable tunes.

Fortunately, as the second act evolves, there is an emerging gestalt and a sense of the triumph of the people and the calm endurance of Mandela, aka Madiba, is communicated.

Through much of the action, he is depicted while enduring his incarceration, elevated behind a screen and illuminated like an icon. This is quite effective and Mandela’s impersonation by Perci Mooketsi rises above much of the bad script to give him the presence and sense of human grandeur that Mandela deserves. Mooketsi’s delivery of the song, Invictus, is a moving high spot of the show.

Mandela’s life story and the fight for freedom in South Africa are threaded together in rap by the very lithe and sinewy David Denis as Narrator. He adds a Michael Jackson physicality to the show, along with some tumbling and likeable good spirit. Choral harmonies are strong also, and some marvellous voices emerge particularly from Ruva Ngwenya, Blake Erickson, Tarisai Vushe, Barry Conrad, Madeline Perrone and Tim Omaji.

There’s a lot of fierce or triumphant fist-waving amid the foot-stamping choreography which, despite the African leggings and caps, has something of an Irish feel to it. There are ambitious anthems and lots of action but Madiba the Musical can’t shake the amateurish formulaic structure and clichéd script. It is the loving zeal and sheer vitality of the hard-working and talented cast which bring Madiba to life, and the benign presence of Mooketsi symbolising one of the great men of our time.