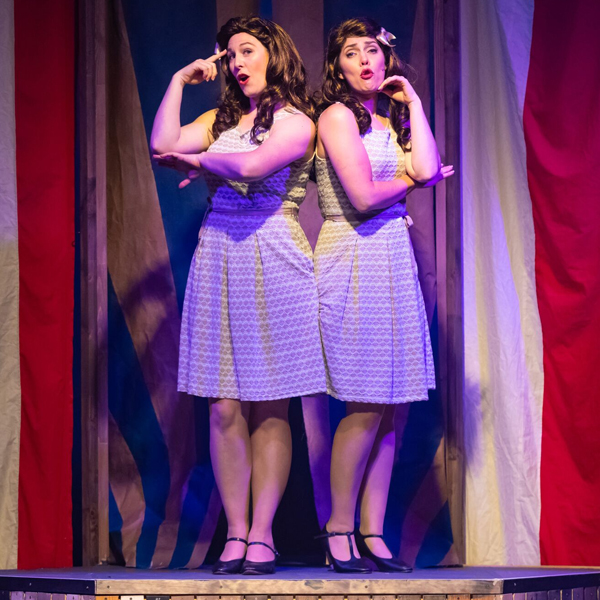 The story may be tragic, but the production is not.

Hills Musical Company has thrown a massive and extremely weird-looking cast upon their little Community Theatre stage. Call it freakish, for indeed that was the old buzzword and the theme of the show. The denizens of the old-school travelling side show were indeed society's oddballs and outcasts.

The conjoined Hilton twins, Daisy and Violet, were the superstars of the variety show genres of the 1900s. They were joined at the hips and, although they shared no organs, their shared blood vessels made separation very risky under the medicine of the day. So, despite being mercilessly exploited and ill-treated by family and managers through what was to become a headlining showbiz career, they vowed always to stay together by choice as well as necessity.

Hence, the one great I Will Never Leave You anthem of this musical show, devised in the 1990s around the life and times of the twins by Bill Russell and Henry Krieger.

Despite its colourful content, this tribute show is rarely performed, not only because of the difficulty of finding matching singers to play the twins but, one concludes, because the music doesn’t really hold up.  It is very demanding of the singers and it is devoid of memorable tunes.

This said, the HMC’s orchestra under conductor Mark DeLaine is absolutely stunning; strings and wind sublimely balanced and a pleasure on the ear.

Indeed, with direction from Amanda Rowe, the production itself is slick and schmick with the very able cast well-rehearsed and focused. Similarly classy are the costumes which have to depict the assorted sideshow characters from lizard man to half-man-half-woman. They swarm and mass across the stage, a cast ranging  beanpole tall to utterly diminutive, from dog hairy to billiard ball smooth; a vast parade of vivid diversity in a set which transforms from tent flaps to vaudevillian glamour and a few other things in between. Designer David Lampard had the crew busy moving large wooden frames into austere compositions to represent the evolving scenes as the girls’ lives progressed from cruel side show subjugation to mere showbiz exploitation.  The girls might have been talented singers with defined personalities, but they were always the ingénues under the control of one or other manager or producer.

HMC scored brilliantly in casting Scott Nell as the first of these, the ruthlessly Cockney carny called Sir.  In voice and characterisation, Nell gives a powerful performance.  He is followed by an opportunistic song and dance talent scout called Terry who, with his gay mate, Buddy, woos the girls away from the freak show and onto the main stage where they are to become glamorous stars of the day.

Paul Rodda, something of a song and dance man in his own right, embodies Terry and does so with a professional polish which is the talk of the foyer at interval. It is a finely nuanced performance.

Meanwhile, as the sidekick Buddy, Jared Frost is exceptionally engaging in both characterisation and song.

There’s some terrific singing coming from stage, all powered by mikes so the rafters sometimes ring. A few cast members use their acting skills to cover for the challenges of the difficult musical score.

Not so the two principals, Rebecca Raymond and Fiona DeLaine as Violet and Daisy, the hapless conjoined twins. They’re superior singers, both. They move well together with their costumes joined at the hips. They harmonise exquisitely and they each assert credible and interesting characters who elicit audience sympathy.

Thus, with its torrent of complex musical numbers and some neat choreography, the show flies along at a good pace, albeit some of the songs are a bit long. There are more stand-out performances, not the least of them Ray Cullen as Houdini and others.

Wendy Rayner, Jared Gershwitz, Elle Nichelle, Alana Shepherdson, Cassidy Roberts, Shelley Crooks and, of course, Omkar Nagesh as the girls’ dear friend and protector, all merit mention and the list could go on: the dancing girls, for instance and the male ensemble in its moment.

There is a mass of life and light and bright talent in this great, big, offbeat show. It is definitely worth a night in the Hills.

Editors Note: Paul Rodda, who plays Terry Connor in the show, is also the Editor of The Barefoot Review.