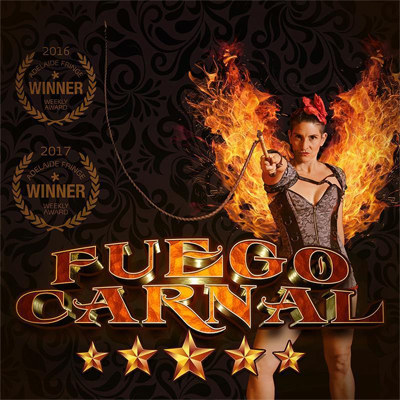 The name says it all: ‘fuego’ is Spanish for ‘fire’, and, well…. ‘carnal’ needs no explanation. Put them together and you have a fiery (literally) and hot (in the sensual sense) display of circus skills that have you on the edge of your seat for an hour. Take away the fire, and there are probably better circus acts, but add the fire and it’s altogether something else. All of a sudden the bizarre seems almost unbelievable: not just fire blowing, but swallowing it; aerial gymnastics while on fire, and then a balletic landing on ice; sword swallowing, but ones that glow in the dark, even while they are deep within your torso; playing up tempo anthems on the bagpipes which shoot burst of fire on beat; fire sticks blazing at both ends being flung about and twirled around contorting bodies with seeming abandon.

The question on everyone’s lips is: how do the performers NOT get burned? It’s madness!

But it’s not all shock and awe. There’s humour as well, with the almost obligatory “let’s drag a poor unsuspecting punter up from the audience and embarrass him”. Such routines can be tiresome, but not this one. It was sharp, well-constructed, and, like good pantomime, was riddled with sexual innuendo that sailed completely over the heads of the kids in the audience but had the adults roaring with laughter; no doubt then left with the inevitable follow up questions from their sons and daughters!

The show is well choreographed, and the acts fit seamlessly together. The hour passes very quickly almost leaving you wanting more, but not quite. The show finishes with a traditional parade of the cast, rather than a fiery up-beat bang!

Recommended for all the family!

Where: Empyrean at Gluttony