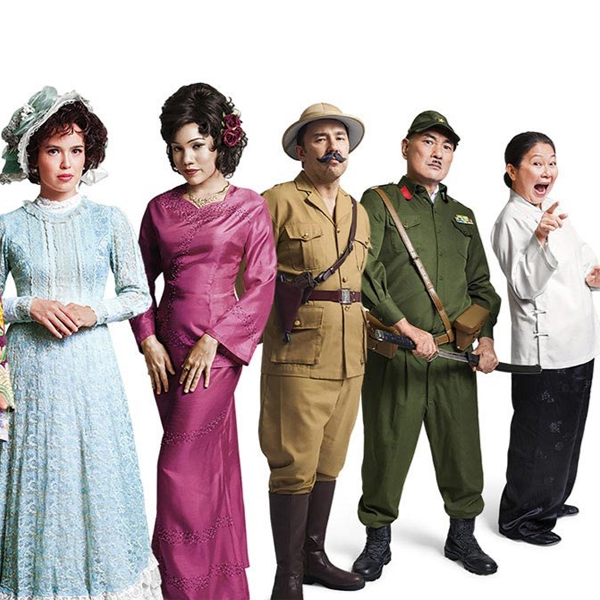 The jewel in the crown of the OzAsia Festival shines very brightly indeed.

The Singapore company W!ld Rice Theatre, with playwrights Alfian Sa’at and Marcia Vanderstraaten, have devised a Singaporean history work ingeniously centred on what happens over a century in a single room in a grand old hotel. It is unnamed but fairly clearly it is Raffles.

The play's five hours embrace eleven episodes: small plays representing different situations and characters from 1915 to 2015. Incredibly, eleven languages are spoken through the eleven scenes, English predominates and the others are translated on sur-title screens.

Hotel staff function as the chorus introducing the show with a lovely piece choreographed around rolling suitcases. Thereafter, dressed as the hotel valets and maids, they define the scene changes and complement the history symbols which also are represented in black and white photo images on the set.

The production opens with a colonial plantation owner on honeymoon with his Eurasian bride. The audience cringes at his imperialistic sexism. Ten years later in the roaring 20s, Malaysian Chinese cousins, one a hotel laundry worker and the other a servant of the rich Mrs Wong, are reunited in the room and mock the class system by parading around in Mrs Wong’s frocks. Their merriment is shattered by the visit of an Irish nun on the lookout for girls sold into service and the audience again cringes in sorrow. Between scenes, the hotel staff converge on the room cleaning traces of former guests, as indeed hotel staff are meant to do.

The 30s brings an oddly wacky scene with a shrill Indian spiritualist and very strange and spooky séance. A decade later it is Japanese occupation and a heart-rending scene with a Japanese captain and his Malay lover. So sad. But Wild Rice and its large cast, whipping from costume to costume and character to character, lift the mood to Bollywood frivolity with an Indian star who dares to want to make a “realistic” movie. This is the 1950s and the characters are over the top, the script is comical and the dancing is superb. Come 1965, the sexual revolution is suggested as the hotel room service manager woos the TV repairman. Their doomed relationship is eclipsed, however, by Lee Kuan Yew on the broken TV reading the announcement of Singapore's separation from Malaysia.

Already the company has spread its wings in the array of characters the actors portray. They’re a fine, strong and versatile cast, some of them trained in Australia. They are racially diverse and linguistically athletic. Directed by Ivan Heng and Glen Goei, they are the wondrous ethnic blend which is Singapore.

In the 1970s there was Singapore’s famous Bugis Street, the world headquarters for gorgeous drag queens and trannies. Hotel opens with an American army vet bringing two Bugis St beauties back to his room along with a stash of first class coke and acid. He trashes himself on the drugs and passes out leaving the girls to their own devices. The W!ld Rice Theatre actors capture their fantastic feyness to a tee. Monika takes the man's money and leaves her friend discovering the effects of LSD. And thus is the scene a wild acid trip with giant penises and a sparkling angel mother laying on a guilt trip. The scene becomes colourful high action and fun with a poignant edge.

In 1985, the story of 1945 is recalled. This scene of the Japanese businessman tracing the woman in a photo given to him by his father is profoundly moving and superbly performed. It attempts to tie up the loose ends of life.

Indeed, as the scenes of Hotel II evolve, it becomes clear that the play is intent on deeper themes within the comings and goings of the hotel guests.

Then, again, sensitive issues can get a light touch. Racial tensions, for instance, are delivered with colourful and comic treatment with the hotel room now, in 1995, occupied by a bride and her helpers changing from the wedding dress. She has the most wonderfully strict and intractable mother and a bit of a loopy new Indian mother-in-law and the big issue is which national dress she should wear. It’s a funny scene which also is not funny.

By 2005, Islam has become a more emphatically expressed force in largely Chinese Singapore. A Muslim woman, returning to the room in which she had such a delightful time as a girl in 1955 when Islam was less adamant, finds her now stricter Islamic family is seen as a security risk. Singapore has changed and so have they. And of course, the world at large is changing too and this remarkable play mirrors that.

The show wraps up with a beautifully dignified grand 2015 scene in which the hotel management and its new Middle Eastern owners are at a loss dealing with a long term guest who is on his deathbed. This wonderful man puts life, class, immigration and compassion into place.

Again, there are superb performances from the large ensemble cast as they leap from principal character to chorus and back again. These are experienced actors of strikingly different backgrounds, multilingual and, let it be said, pretty good dancers, and with the quietly changing character of the hotel room and the artful marriage of relevance with sheer ingeniousness, they bring us a five star Hotel experience.