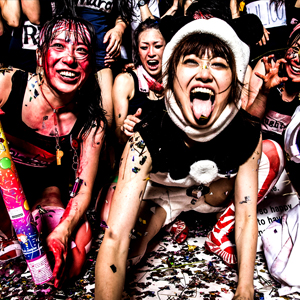 Anyone familiar with the Japanese reality TV scene which SBS has done a great job of broadcasting in Australia, will have an immediate hook into the kind of experience Miss Revolutionary Idol Berserker promises.

In a mere three years, Director Choreographer Toco Nikaido has taken her company and work to Europe as well as the Asian arts festival circuit and made such a name for themselves they are invited back. Not hard to see why.

What a mind bending, joyous, wild and thought provoking experience the work is. Imagine being in the middle of the high-energy insanity of your favourite Japanese reality TV show. Imagine having buckets of water thrown at you from all directions along with constant showers of multicoloured glitter falling on you from the rig above. All the while, you’re being bombarded visually by pop culture video, song and dance straight out of the zaniest traditions of karaoke bar life.

There is definitely method in the madness, a crazy mixed up story blending the struggles of Miss Revolutionary Idol alongside the freedoms and wonders of Australia. All this told in delightful sugar coated fantasy style accompanied by cliché Aussie tourism images of your standard cute koala bear and flag.

Miss Revolutionary Idol Berserker is the most insanely brilliant melange of European styles of immersive theatre, theatre of cruelty and cinema with uniquely Japanese styles of story telling and mythology clearly reflecting the 70 years plus influence of US consumerism and culture on Japan since World War II.

What makes it so unique from an audience perspective is you’re never sure if you are the show for the performers, who are having a blast peppering you from all sides in the friendliest fashion, or the show in front you is meant to be the show. All the while, your mind is being very much love bombed into instant happiness by all the smiles, fun and games going on.

When the audience is invited onto the stage and applauded by the performers, it’s the moment you really start wondering, what’s important? The seemingly disposable pop gum experience or clearly genuine enthusiasm of the artists, for us as human beings?