WOMADelaide 2021: Re-inventing for the Pandemic 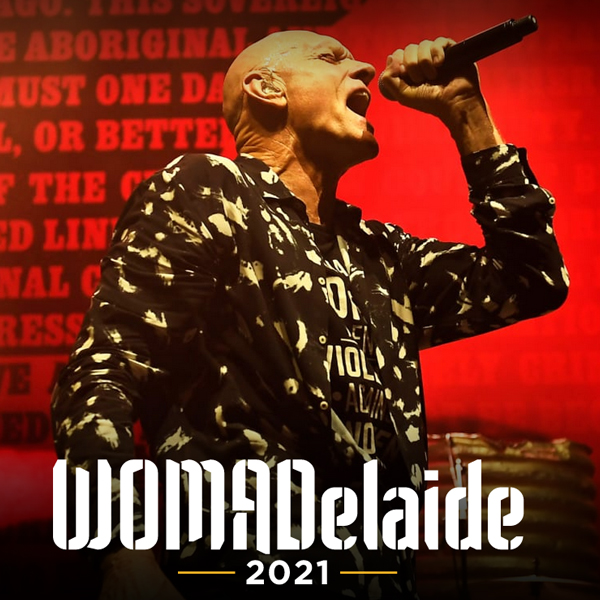 Murray Bramwell talks with Artistic Director, Ian Scobie about the challenges of planning a music festival during COVID. 21 Feb 2021

The last time I interviewed Ian Scobie about WOMADelaide it was late January last year and Kangaroo Island was burning down. The bushfires -which engulfed huge sections of the country, sending serious smoke haze into the cities - were on everyone’s mind. Scobie’s company APA was running a national tour for the Italian composer, Ludovico Einaudi, who was due to perform at the Myer Music Bowl. It was uncertain to happen because of poor air conditions. Fortunately, the smoke dispersed and the concert went ahead.

But nothing matches 2021. As Scobie describes it:

“It’s been very, very challenging really. I have to say that since working in Festivals-land since 1984, you come across the usual challenges – air traffic control for Peter Brook’s The Mahabharata at the Quarry, or suddenly finding a tented venue has a third of the capacity it is supposed to have.

“But this is a whole kind of other degree of uncertainty – which, of course, the whole world is dealing with, it’s not just poor us. It’s the constant uncertainty that’s so different. When we found out we couldn’t get a permit to do the full scale event we had to ask ourselves – ‘Do we do anything, or just cancel?’

“The decision came very late in the year. We were meeting with SA Health in some detail from June 2020 onwards and we were backwards and forwards discussing ways of dealing with the situation and avoiding over-crowding. We were maintaining parallel programs - an international one if things got better, and then an Australian one. By late August we thought international was unlikely so by September it was going to be a program sourced within Australia. We had that arranged, with the diversity one would expect - culturally and musically.

“It was then not until the second week in October when, after more back and forth to SA Health, they said – ‘Mmmm. No. We just think the combination of the duration, from noon to midnight, and the multi-stage format with audiences’ crossing over…’ It wasn’t something they were able to support.

“We just had to call it. So then we had to find out from SA Health what maximum event number we could have, and addressing their concerns meant we came to our decision – to have one stage, individual reserve seats, individual tickets not day passes. That meant contact tracing for Person X sitting in C 27 on Friday night or Saturday B 36. The QR app was not introduced yet. “

“They were very helpful and keen to have us use their venue and it is a fabulous stadium. But it’s an oval. It is not really part of the ethos of the WOMADelaide event. Which is how we ended up at King Rodney Park.

“Once we set parameters we had three days to get back to SA Health with a plan for six thousand seats, spaced in a version of checkerboard, a single fixed stage and operating hours confined from 6 pm to midnight. The duration of people’s exposure is reduced and we know who and where they all are. “

At first Scobie considered using Elder Park but it was impossible to establish good sightlines for the size of the crowd. The same held for Botanic Park – the home of WOMADelaide since it began in 1992. Since it is a park full of trees there was nowhere that a seating rig could allow an unimpeded view for more than three thousand which, considering the overheads, was not financially viable. So Scobie and Mark Muller, the production manager, drove around the city looking for possible sites.

“We came across King Rodney Park – bounded by Dequetteville Terrace, Wakefield Road and Bartels Road. It contains an arena, has a fringe of trees, and parkland all around. So you have a sense of arrival and enclosure. It is the Christian Brothers College oval which is owned by the City of Adelaide and leased to the school. It is maintained for sport but open to the public. We have divided the area into zones – two thousand people through each of three gates, with six thousand the capacity. It will have a park feeling and we wanted a sense of enclosure. It will be a different concept but I did have one longtime WOMADelaide supporter say to me – ‘I’m so looking forward to having a seat!’ “

Scobie is pleased with the venue and the arrangements.

“I thought we had an obligation to run WOMAD in some form or other. I was opposed to presenting something like a single concert inside an auditorium that bore no resemblance to the event. I also had a concern that we needed to provide employment for the artists. Here we are in the middle of a pandemic and the arts are the first hit and the most heavily impacted – I think, even more than tourism.”

The 2021 four night concert program, developed by Associate Director Annette Tripodi and her team, is the tip of an organisational planning iceberg that has been busy all year. The 25th WOMADelaide, in its 29th year and one of the city’s most enduring events, will be remembered by the staff as a massive contingency exercise, a carefully constructed framework of events that could have been, but never happened. Scobie observes:

“Annette has done an amazing job. There is a full Australian program that’s never seen the light of day – which would have been terrific. But planning like this may be the future. I do hope we are gong to have a full scale event in Botanic Park in 2022, whether it has an international component, who knows? Next year will be a bit of a Groundhog Day with the same uncertainties. We will plan parallel Australian and international programs and see how it goes. Ziggy Marley is keen to come, if we have internationals, he will be in it!”

The Friday night line-up opens, as WOMAD has done often before, with the participation of the Adelaide Symphony Orchestra. They will be accompanying Lior, another festival favourite, in his performance of Compassion, a song cycle composed and conducted by Nigel Westlake. Commissioned for the Sydney Symphony, Compassion incorporates texts and themes from both Islam and Judaism. Of the project Westlake has said - “We have tried to imbue the ancient texts with a contemporary interpretation, adhering to the purity of a single voice and orchestra. “

Also appearing is Archie Roach, whose classic album Charcoal Lane featured the anthem of the Stolen Generation, Took the Children Away. His music has been re-released in recent years with the box set, Creation, and a remastered version of Charcoal Lane. His performance will be the first of many over four nights, highlighting indigenous culture and issues.

Completing the night’s list is the excellent Sarah Blasko whose ARIA nomination and Triple J Album of the Year, As Day Follows Night, has celebrated its tenth anniversary with a re-issue plus bonus tracks. It sounds fresher than ever and her set will be a great note to close on.

Saturday night is an especially hot ticket and is already heavily subscribed. It opens with young Indigenous rappers MRLN x RKM (aka. Marlon Motlop and RullaKelly-Mansell), new talents sponsored by WOMADelaide and the NSS Academy.

Next is the near legendary Vika and Linda and their outstanding band, and we will be reminded what a strong repertoire they have gathered over a brilliant career. Their ample compilation album, Akilotoa, is impressive, not only for its range and appeal, but also because they are some of the finest interpreters of the songs of long-time collaborator, Paul Kelly.

Headliners on Saturday are Midnight Oil. As Ian Scobie observes:

“Midnight Oil have been regularly on our books and we check them out to ask –what are you doing this time? They played WOMADelaide in 1997 and Peter Garrett has returned a couple of times to Planet Talks. He has fond memories of that particular gig. They also performed at WOMAD UK going back a way. So there’s always been a connection. We had been talking for 18 months to two years out. They were planned for this year. Nobody thought it would be like this, but it was great to have it in prospect. People thinking – ‘Oh God this is not a traditional WOMAD! ‘Instead, they see it’s Midnight Oil and they are also doing their Makarrata Live project on the closing night. “

Sunday night was scheduled to open with Zambian-born singer, Sampa the Great, but she cancelled all Australian commitments because she had travelled to Botswana and, due to COVID border restrictions, could not return. Instead, two emerging talents will perform. Pitjantjatjara/Torres Strait Islander artist , Miiesha, winner of a 2020 ARIA best Soul/R&B for her album Nyaaringu, will feature, along with PNG-born Melbourne artist, Kaiit, 2019 ARIA winner for her single Miss Shiney.

The amazingly multi-talented Tash Sultana tops the card. Their debut album Flow State, double platinum single Jungle and the multi-platinum Notion EP have all been streamed hundreds of millions of times, some say up to a billion. Tash Sultana has a massive global following and they will also be featuring material from this month’s release, Terra Firma.

Monday’s program opens with Adelaide band Siberian Tiger, featuring Bree Tranter and Chris Panousakis, who released their EP Last Dance last year. They will also feature a string quartet. The Teskey Brothers – Josh and Sam - plus Brendon Love and Liam Gough formed in Melbourne in 2008. Since then they have added keyboards and horns and have begun the most sought-after soul/blues live act in the country. Their excellent album, Run Home Slow won ARIA for Best Blues/Roots album. Last year’s release, Live at the Forum is a glimpse of their presence on stage. Their show will be quite something.

And to close this one-of-a-kind WOMADelaide, Midnight Oil will perform the world premier performance of Makaratta Live, a concert featuring prominent First Nations artists and raising public awareness of The Uluru Statement. The Oils will perform familiar hits connected to Indigenous Reconciliation as well new songs, Gadigal Land, Change the Date, and Terror Australia. It will be a significant occasion – and a chance to affirm the values of the Uluru initiative which have been shamefully deflected and ignored by the present government.

After all the speculation and logistical modelling, Scobie is hoping that much of his team’s time-consuming anticipatory work will not be necessary. There won’t be interstate lockdowns, or last minute border closures, or quarantine emergencies. The artists will all arrive in time for COVID tests to be cleared, and hotel floors will be sealed off for their greater safety. But as Scobie acknowledges –

“It all rests with SA Health and their committee. Everyone is doing their best but no-one can give you a guarantee. Months ago a colleague said to me – ‘Who knows? No-one. That’s who!’ “

So, says Ian Scobie with a wry smile, I keep saying – “It’s going to be great. “