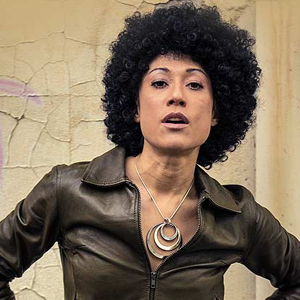 Betty Davis is not to be confused with Bette Davis.
One is edgy, gritty and dirty and the other is a golden oldies star.
It is Betty with a "Y" that Cecilia Low is bringing to the Adelaide Cabaret Festival. She's Betty Davis out-there rockfunk chick who was once Mrs Miles Davis.

"Betty used to hang out with Jimmy Hendrix and Sly and the Family Stone," Low explains.

"She was only married to Miles Davis for a year but in 1969  he changed his sound.
His Bitches Brew happened because of Betty."
Davis later was to acknowledge this. He was also to divorce Betty because  of her relationship with the psychedelic era rock guitarist Hendrix. He was sure she was having an affair with him. Betty always said not.
Low describes her as "a person who connected people", a charismatic star in her own right, a "celebrity's celebrity".
"Everyone wanted to be around her," she says.

Betty Davis had started out as a model but she was drawn into the wild music world of the 60s, recording with the likes of Santana and the Pointer Sisters and dating Eric Clapton. She was to produce her own raw and earthy funk sound which was to excite many.
"She has a very hard wedge and was a handful to listen to," says Low.
But Low was among those to be fascinated by her -  albeit a lifetime later.

"When I was at the Elder Con, before I left Adelaide, someone must have re-released her music," she recalls.

"My sister Jaci said 'it made me think of you' and bought it for me. Why, I don't know. She'd never done anything like that before. But it became my go-to music.

"I'd never heard a woman sing like it before. It's not acrobatics, like Maria Carey or Aretha Franklin. Betty Davis tells stories and they are compelling.

"I knew I'd do something with her. It just grew and grew".

Cecilia Low's talents were honed in Adelaide and she has never lost touch with her home town. Her credits include Sondheim's ‘Assassins’ with Flying Penguin Productions and the Yaschin Company's adaptation of Gabriel Garcia Marquez's ‘I Only Came to Use the Phone’.

Stretching her wings, she was to perform in blockbusters such as ‘Miss Saigon’, ‘Rent’ and ‘The Lion King’, which took her all around the world.

Now settled in Melbourne, she has been working in production for film theatre and photography, being lead singer in two bands, ‘A Little Something’ and ‘Slide Night’ and establishing herself in a day job.

"I did something I really wanted. I went back to school and became a remedial masseuse," she declares.

"Now I have my own little business, Ci Cure."

Having suffered her own assorted injuries in the tough discipline of musical theatre especially, she says, in the latter year of the Lion King in London, she understands the injuries and the therapies of theatre people. She knows too well how they exacerbate injuries with their "the show must go on" philosophy.

Now she loves the fact that many of them are coming to her for treatments - musicians, dancers, Circus Oz performers, Warhorse performers...

"I know about the crazy injuries a lot of puppeteers suffer. I relate to performers." Her work in movie house production was, she says, to give herself "a different take on the arts" - and, now partnered with cinematographer and lighting designer Cameron Zayec, she has brought a fresh element of the cinematic to her Betty Davis show.

"I want to blur the line between a live and cinematic gig," she explains. "There are pre-records and live projections. All the senses are covered. I even have a dance floor with a mirror ball and I encourage people to get up and boogie."

She brings the show with inputs from bass player Tony Kopa, as musical director, Kenneth Moraleda as director, Amanda Riley as "style and fro tamer" along with Phil Ceberano on guitar and Greg Patten on drums. "I started working on the script when I was in London but shelved it. A year or so ago, I restarted it and the timing was right," says Low.

"It had been slowly forming inside me.

"But I was wondering who could be in it. I had not thought of it being me."

It took but a suggestion from a friend for the penny to drop and the singer/dancer to step into the character of fusion queen, Betty Davis. She is not delivering Davis as a linear story rather than delivering an overall impression of Davis's time in musical history.

"She just stepped away."

Low believes that Betty Davis was ill treated by the industry in her day, probably because she was so outrageous and provocative.

"She screeched and screamed and talked about sexuality," she says.

But she was a catalyst in the history of music - and she was different.