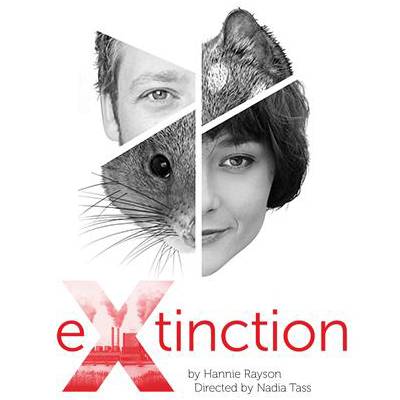 Animosity between environmentalists and the fossil fuel industry in Australia has been an entrenched part of the country’s social landscape for a long time. However, with the rate, scale and severity of environmental damage escalating dramatically in recent years, tensions between the two sides has never been greater. Despite this, it isn’t often that environmental issues feature so strongly or directly in theatre productions as they do in Extinction.

This is a great shame for two reasons: firstly, the environment and the services it provides underpins human survival; and secondly, the passion which so many people feel towards the environment, and the work they do to protect it, means there is no shortage of dramatic material to work with. Extinction is an eco-drama that tackles this theme head-on, exploring the daunting challenge of preventing, or at least slowing, the extinction of our native fauna.

It is quite ironic that the commissioning of this play was originally funded by the Alfred P. Sloan Foundation – a non-profit organisation founded by an industrialist to educate the public about economics and capitalism, among other things. While Extinction was written with the aim of teasing out the tensions and complexities between environmental preservation and the need to generate electricity for an energy hungry world, there are some assumptions within it that sit a little uneasily.

For example, it seems Piper, the stereotypical ‘manic eco-pixie dream girl’, and Andy’s commitment to environmental conservation is readily labelled as neurotic – simply a result of immaturity and unresolved emotional problems. Conversely, the world-weary Heather and Harry are portrayed as the voices of reason; the realists who know how the world really works. However, the rapid rate at which Harry is able to seduce, corrupt and compromise both Heather and Piper is the real humdinger – an insult to the intelligence and integrity of both women and environmentalists.

These criticisms aside, Extinction is actually an intelligent, intensely gripping piece of theatre. The performances by Fair (who put on an accomplished American accent by the way), Cousins, Herbert and Lane are top shelf and utterly entertaining – with admirably strong teamwork on display as they masterfully navigate the chemistry and complex dynamics between their characters.

Also impressive is the amount of research into the subject matter that was clearly undertaken in writing this play. A great deal of attention is paid to details regarding cultural language, scientific jargon and the current state of affairs more generally regarding these two very different and opposing worlds.

The design team (Shaun Gurton, David Parker and Daniel Nixon) also deserve kudos for their creation of such a slick and sophisticated visual aesthetic. The projected images and authentic soundscapes used to transport the characters from the city to the bush were highly effective, with the big finale admittedly a massive tearjerker.

While succumbing to stereotyping at times, overall Extinction is a reasonably balanced portrayal of the age-old shit-fight between environmental conservation and sustainability and the opportunistic exploitation of earth’s resources. You won’t find any solutions or mended bridges, but at least the issue is being explored in a thoughtful and considered way on such a broad-reaching platform.