What Happened to Sandman 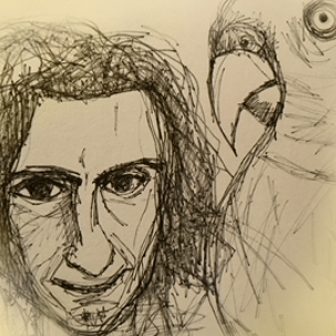 (Or How I Became a Birdwatcher). By Steve Abbott. The Street Theatre 28 May 2016

I choose to start my review, now: If you listened to Triple J radio or watched Good News Week in the nineties, you’ll be well familiar with Steve Abbott’s alter-ego, The Sandman – that classic Australian character that sounded like a sardonic Bernie Fraser and doled out sound advice to the unpopular.

But like many of our country’s great comedic creations, there came a time when The Sandman persona had run his course and it seemed fit to retire him from public life; well, easier said than done. What Happened to Sandman (Or How I Become a Birdwatcher) is about Abbott’s struggle to untangle his identity from a character that defined him and stubbornly clung to his side.

While grabbing a drink ten minutes before the show is about to start, the sound of Abbott at the microphone booms through the door of Street Two. Worriedly checking with staff that the show hasn’t started early, they shake their head and smile – it’s just Abbott’s quirky way of breaking the ice and the formality of the atmosphere, and it works a treat.

The show proper is a whimsical exploration of Abbott’s years of embodying The Sandman. Commencing with a candid backgrounder on the birth of this persona, the show continues on through his reigning moments and eventual free-fall brought on by flogging a subversive character that’s past its use-by date to a mainstream audience.

Admittedly, it is surprising to witness how different Abbott is from The Sandman: upbeat, quick-witted and incredibly genial, with a real talent for bird calling. As a performer in his own right he is engaging, working the crowd like a boss and creating a warm and relaxed atmosphere – even rounding off the evening with a friendly farewell at the door.

The skits peppered throughout the tight, hour or so show are also an absolute delight – taking full advantage of being in the capital with the obligatory Canberra gibes (it’s ok, we’re used to it). Really hamming it up, Abbott took riffing to a whole new level and absolutely revelled in it.

What Happened to Sandman (Or How I Become a Birdwatcher) is a personal experience of letting go, and a story about the unexpected but fulfilling paths in life one takes while navigating through that process. Rest assured though that The Sandman legacy will live on in the hearts of the generations that were lucky enough to experience such a defining, golden age of comedy in this country.

Gone but not forgotten.