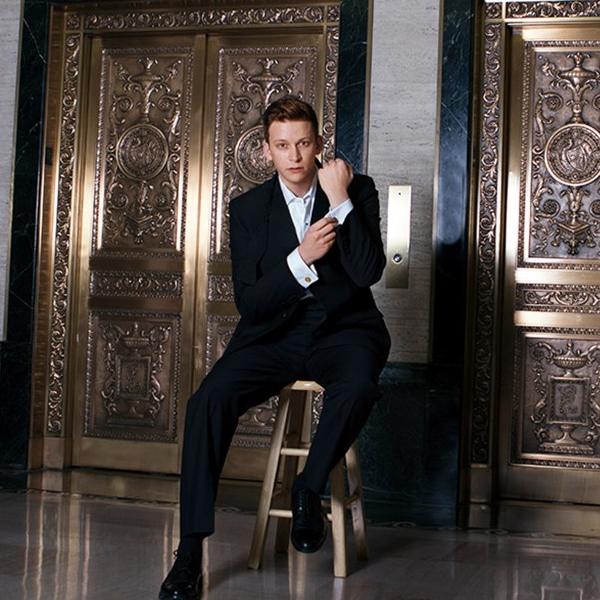 As if his main program hadn’t already won-over the hearts of the large audience, Aryeh Nussbaum Cohen’s gorgeous performance of the Broadway song Adelaide as his encore conclusively sealed the matter. Composed by the legendary Frank Loesser, Adelaide was written specifically for Frank Sinatra to sing in the film version of Guys and Dolls and includes the lyrics “But Adelaide, Adelaide, ever-loving Adelaide, is taking a chance on me.” On hearing those words, the large Adelaide Town Hall audience collectively intoned a satisfied ‘aahhhh’ behind their compulsory face masks and wished Cohen would stay on amongst us for more concerts instead of wanting to race home back to his fiancée in San Francisco whom he has not seen for several months.

We never took a chance on him. Cohen is a consummate artist who is already near the top of his game and would seem to have a starry future before him.

Cohen is a countertenor of comparatively tender years – he is only twenty-seven years old. His voice is already a superb instrument and is unusual when one considers that he appears to be a solidly well-built young man with neck musculature that is not commonly associated with counter tenors. His song selection covered the usual territory associated with his voice type, and we delighted in his vocal wizardry in arias from Handel’s Saul and Rodelinda. The audience wanted more Baroque repertoire but instead Cohen served us an unusually eclectic program with unexpected inclusions that showed off his talents and flexibility to the best advantage.

He begins his concert with Quilter’s Three Shakespeare Songs which announces to the audience that his talent is the ‘real deal’. His performance of Night by Florence Price is sublime: beautiful articulation and deep empathy with the text. Muted desire is evident in the four Brahms lieder that follow, and the first half of the program finished with an astonishing heart-felt performance of two Jewish hymns.

After the interval, the Handel arias are followed by sensitive and passionate interpretations of three songs by Henri Duparc. The concert rounds out with selections from the American Songbook as Cohen’s thoughts perhaps gently turn towards San Francisco. Misty, by Erroll Garner, is hauntingly sung, but Bewitched, Bothered and Bewildered doesn’t quite have the degree of sultriness we usually associate with this classic number from the Rodgers and Hart musical Pal Joey. However, I Get a Kick Out of You by Cole Porter is the perfect choice to finish the show and shows that Cohen can sing repertoire from across the centuries and make it all his own.

Throughout the concert Cohen is accompanied by Konstantin Shamray at the piano. Shamray is no stranger to Adelaide audiences as a virtuoso soloist, and it is a treat to enjoy his performance as a collaborative pianist. He and Cohen clearly prepared the concert well and the understanding between them is evident. Little things, like the vocals not being overshadowed by the piano on the first note of a phrase, are evident, and Shamray’s virtuosic ‘jamming’ in the closing numbers thrilled the audience.