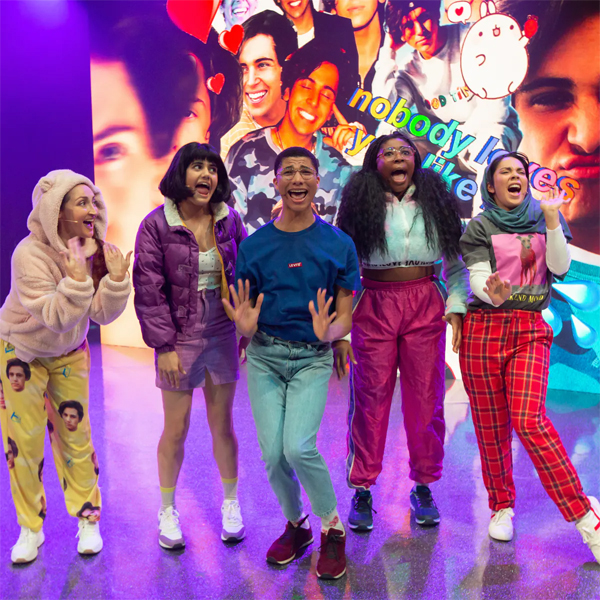 A new Adelaide Festival phenomenon has arisen. It’s the Fangirls fan! Count this veteran critic right in there among them.

This brand new Aussie musical has all the good ingredients and then some. If there are any shortcomings to the show, they are utterly forgiven since the whole package is such a classy feel-good experience.

Ironically, it is a show with a very dark side to it. It deals with the psychopathology of fandom and the online cult of fan groups. It delves so deeply that one wonders how it can extricate itself. It does so with one song too many. Including interval, it is a two-and-a-half-hour show after which its audience leaps to its feet and whoops with glee.

It is a breath of fresh air. It is a brilliant idea. It is as serious and relevant as it is lively good fun. It is exciting. It is an exposure of dazzling new talent. It is top notch professional theatre. It is on the internet zeitgeist. It taps a huge, cross-generational nerve.

Furthermore, it is a loud, pop-style musical which does not leave one's ears ringing, albeit it very cleverly makes the seats vibrate beneath one.

The storyline follows Edna, Jules, and Brianna, 14-year-old girls ardently in fan-love with a young English pop star called Harry. They moon and swoon about him and fantasise about meeting him. Edna, the most obsessed of the three, belongs to one online fan cult in which she shares her fan-fiction ideas with a gay American fanboy nicknamed Saltyspringl. Edna is utterly convinced that it is her destiny to meet the object of her adoration, and to run away with him, thus saving him from exploitative celebrity. When it is announced that Harry’s group is to tour Australia, the passions hot up but things don’t turn out to be straightforward - at all. So, there’s all sorts of drama.

This gives the music a chance to stretch its wings, so to speak, and the songs have a broad emotional range. And there are a lot of songs along with a lot of fabulous dance numbers and utterly whizzy lighting.

Book, music, and lyrics for this brave new show are by Yve Blake and it has been snappily directed by Paige Rattray  with expert support in video content, choreography, sound and of course, lighting. Applause to the whole five-star team.

As for the cast, here’s welcome to some fabulous new talent whose names one cannot doubt will become familiar in due course on the Australian stage.  Chika Ikogwe, for starters. She plays Jules, the most charismatic and also mean-spirited of the three girls. It’s a complex character but this performer is up to every nuance and then some. One falls in love with her. Karis Oka absolutely dazzles as Edna. What a voice. What a dancer. They are supported beautifully by Shubshri Kandiah as sweet, hapless Brianna and also by Danielle Barnes with the tricky counterpoint role of Edna’s battler mum.  She artfully adds an element of poignancy. Ayesha Madon, a powerful singer and dancer, goes all the way as the over-the-top fan girl. Oh, boy, she is a loud one. And then there’s James Majoos as the funny, clever Salty, ever-so-gay with star quality written all over him. Talking of which, there’s AYDAN. Yes, he spells his single name in caps. He’s already found stardom on the Australian music scene in the likes of Australia’s Got Talent and The Voice and he is absolutely the perfect fit for the character of Harry, the superstar subject of the Fangirls’ fixation. AYDAN has absolutely magnetic presence onstage.

Move over kids, you need to make room in the squeal pit for a few oldies.