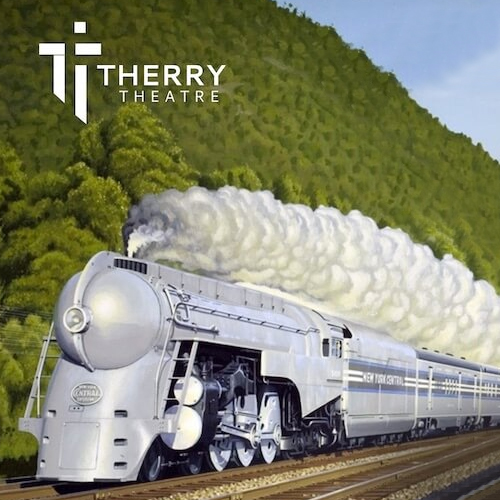 Emerging into the world of covid shutdown, Therry imposes strict conditions with lengthy instructions, including ordaining that no one leaves the theatre before the row-by-row exit rule has been explained. Since Therry attracts elderly audiences, this is admirable duty-of-care.

For its elderly audience, Therry’s first 2021 production proves to be a welcome chuckle in the dark.

It is Ken Ludwig’s 2004 adaptation of the 1932 Ben Hecht and Charles MacArthur play, Twentieth Century, a showbiz-themed comedy set on a luxury train in the glamorous 1930s. It depicts a grandiose Broadway producer’s efforts to revive his collapsing career by exploiting the stardom of his one-time protégé and lover, Lily Garland. It’s all about vanity, glitz, fakery, and gullibility on a luxury train from Chicago to New York. It is also a comedy.

In this Kerrin White production, it is not a rib-rattling, guffawing comedy but more of a cackle-fest, "The Producers" on valium, perhaps. Its set is utterly fabulous, being a series of ritzy train compartments which are shunted to and fro across the stage to reveal and expand the action as the protagonists - a stage-struck doctor and his mistress, a nutty old conman, a rival producer, railway staff, and assorted members of the great producer’s entourage - bumble about in their assorted quests. The humour is hit and miss, rising towards the climax when all hell is breaking loose.

This work has been a vehicle for the likes of John Barrymore, Frederick March, and Alec Baldwin as the pompous producer Oscar Jaffe with Carole Lombard and Gloria Swanson as the female star. Following in such luminous footsteps is a daunting challenge for any actor and, indeed, one feels for stalwart Adelaide actor Lindsay Dunn as he seeks to embody the blustering egomaniacism of the lead character. Dunn is word perfect and diligent to a tee in his portrayal, but trying as he may to achieve blustering misogyny, he can’t help being just a wee bit too nice.

Playing opposite as the brattish movie star and wearing an exquisitely clichéd blonde wig, Shelley Crooks delivers some delicious vapid vanity in a funny, edgy performance.

The supporting cast is consistently strong and well-rehearsed with some pleasing characterisations and the production definitely lifts in the second act. But it is a clumsy, oddball old play, so much a period piece that the program contains a long glossary of references. Hence, it is a goodie for the oldies but it misses the mark for teenagers.