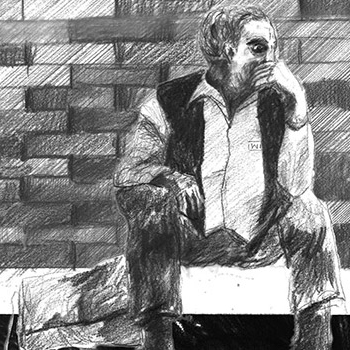 Hence, this brief notice to salute the 2020 graduating students and alert the world to a shining new batch of theatre makers. Their production has emerged against the odds of broken rehearsal times and covid restrictions and delays. In so many ways, it is sad it does not have a longer run for not only does it showcase the graduates but it introduces the work of the rising star among American playwrights, Samual D. Hunter. He is Idaho-born and this play is set in Idaho, albeit in a stereotypical American chainstore, this one called the Hobby Lobby, one of those vast box stores selling eye-watering arrays of paints and craft nicknacks. Interestingly, it is owned by a family of far-right Christian conservative Trump supporters.

The play is a dark comedy of sorts. The plot concerns a man who has fled from northern Idaho and association with a murder scandal in the evangelical church to which he belonged. He sought this particular store in a quest to meet and to create a relationship with his teenage son.

The action takes place in the store’s staff room, recreated to low-budget perfection by the student design team. It could be any staff room, anywhere, but not so much the staff or the high-stress, high-expectation store manager, Pauline. She’s a chip off the American cultural block and Juanita Navas-Nguyen embodies her with utter conviction and buckets of talent. She brings the stage to life and credibility to the character.

With superb focus, Josh Barkley plays Will, the on-the-run super-Christian whose beliefs gradually are revealed through extracts of the so-called novel he is writing as a blog. It is about The Rapture.

The phenomena of extreme religion, retail ruthlessness, mental health, hopes and dreams, and family relationships all devolve from the interactions in this bland staffroom. It is a very taut and clever 85-minute play.

Mikayla Rudd’s character, Anna, a bookish and dysfunctional retail worker, is catalyst to many of these extrapolations with Rudd delivering her as a wide-eyed, ingenuous enthusiast, battle-scarred by an unsympathetic society. It is a wonderful performance.

The adopted-out son , Alex, is a seriously disturbed teenager whose piques and fits are an acting challenge well achieved by Benjamin Tamba, while Clement Rukundo makes a very strong and spirit meal of the anarchical and arty ‘brother’, Leroy.

All of the above were directed with expertise by Chris Pitman, assisted by Taylor Nobes with lighting designed by Kultha Hier. And, all of the above produced an absolute treat as a piece of well-wrought, relevant, contemporary theatre.

Where: Adelaide College of the Arts