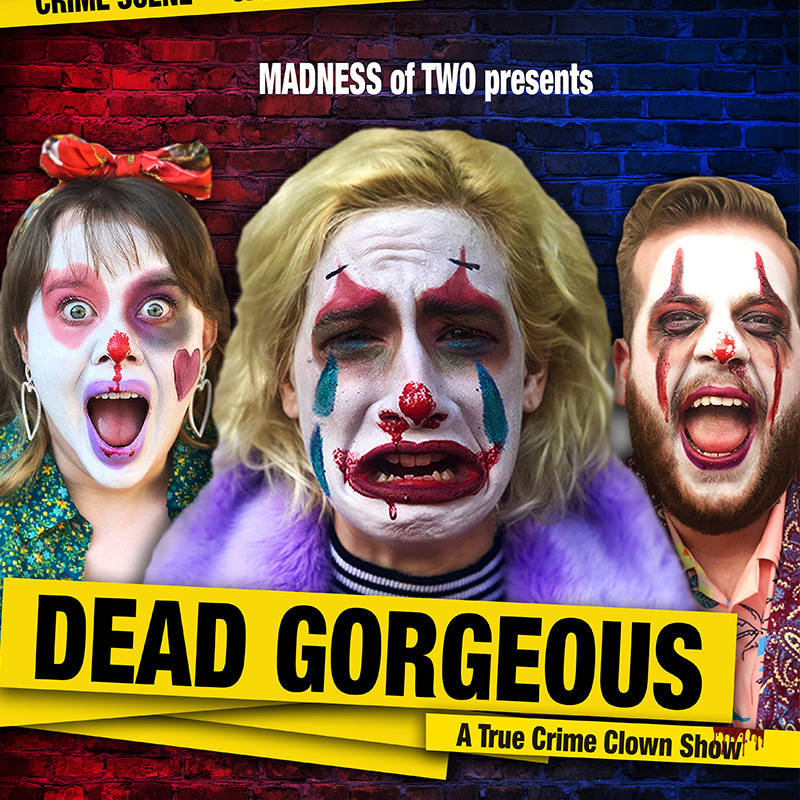 It’s the Fringe and anything goes. Including artful lunacy.

So we have five talented actors, a mass of greasepaint, and a ukulele or two. What to do, they ask the audience as they cling to each other in a display of faux daunted ham. They throw up absurd ideas, and a banana.

And off they go trying out themes based on death and murder and, well, it is quite a busy blur. It is not the clown school of Commedia or Le Coq exactly, albeit costumes do give a nod to Harlequin and Pierrot. And there’s some classic shtick with songs, tumbling, and bumbling, some of it very funny indeed. There are some good lines and, most especially, with thanks to the clown called Wah, AKA James Hornsby, some really wonderful songs. He is quite a talent and, in this show by the new company he co-runs with Ellen Graham, he creates a beautiful, gentle clown character, large and slow, quiet and shy. Graham is his antithesis, hyperactive and athletic. She is a lithe physical-theatre exponent and very funny when needs be. Also noisy. But not as strident as the other two female clowns, Britney AKA Jasmin McWatters and Linda, AKA Zola Allen. Their high-octave girlie screaming and squealing is just too, too much and too often for this critic’s aural endurance. Like Holden Street when presenting the rock opera Ragnarokkr, Rumpus should issue ear plugs at the door. Director, Hew Param, please take note. Screaming is not inherent to clowning or, indeed, to any good theatre. This zany show has potential on too many levels to sink it with squeals.

There is yet Arran Beattie as clown Roger to mention. He can be shrill with the worst of them, but he also can ham it up fearlessly. His voice and comic presence are terrific. Indeed, there is so much that is good-spirited and original and zany in this clownish concoction that it makes a madcap contrast to a lot of the earnestly arty theatre around the Fringe. Then again, this little confection is not beer and skittles. Its slapstick silliness is underscored by some wickedly effective satire. The Under the Rug song is a standout commentary on political evasiveness and Don’t Worry is another song with revue-style substance. Behind the ga-ga-girlie shrills of this production lies a seam of seriously good creative artistry. Let us look out for what else the Madness of Two may do.