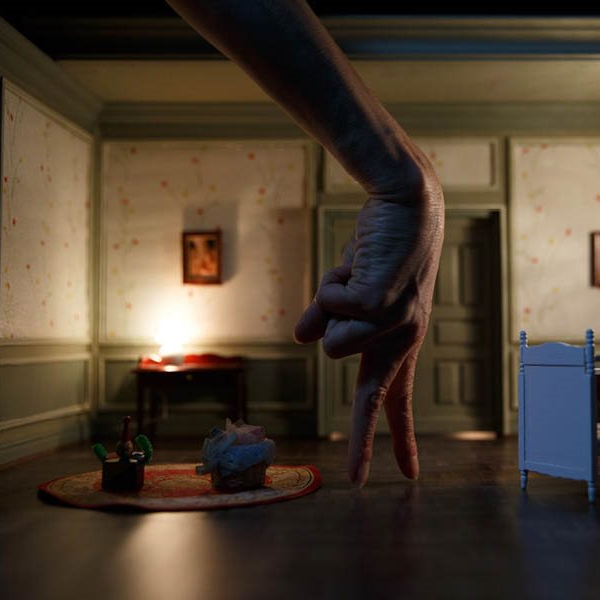 It is surreal outside the Ridley Centre. Two massive queues are snaking around the building. Five hundred? A thousand people? None is young; Adelaide bluebloods and culture vultures, all. They wait very quietly, keeping a distance from each other. The fear of coronavirus is in the air. And they are here to see a show about death.

Inside the towering show hall, perched high on scaffolding bleachers, they soon forget the world outside as the Belgian performance company captures their imaginations.

The voice of Tony Regbo envelopes them like a soothing blanket.  Think Jude Law in timbre and tone and perfect enunciation. This calm and gentle voice is to carry the audience through a strange wonderland of hands, fingers, special effects, and extremely unlikely stories.

Beneath a giant screen, black-clad performer/operators work as an artful team, moving miniature landscapes, water-baths, lights, and even cities around a complex of rail tracks whence cameras capture and project giant images to dance aloft. It is high-tech digital theatre, the digits being dancing fingers rather than algorithms.

The stories are enacted by hand alone. Hands dance in the darkness to music. Fingers make a glory of kaleidoscopic patterns. Wearing thimbles, they tap dance in a shimmering ballroom. They carouse in the water.  They toddle around in perfect dollhouse rooms, designed to their size and projected immense on the big screen for the grand tier of massed audience. They finger pole dance. Oh, my, and how they pole dance.  Sometimes their interplay is sad and serious. Sometimes it is sensual. Sometimes it is comical, none as funny or absurdly inventive as their adventure in the car wash. And the stories run one after another about a series of unlikely deaths, from swallowing a bra clasp to abreaction to mashed potatoes.

Music adorns their world, from Bolero to Major Tom, interspersed with the beautiful voice of Regbo, superbly paced so that not a word of the script is missed. It has been written by Thomas Gunzig and translated by Gladys Brookfield, and it is a thing of great beauty which sings with its own lyrical ingenuity, using similes such as “a scent like a day off work” or “death is like a sleeping cat”.

The miniaturist artistry is wonderful, reminiscent of the taste Adelaide audiences received with the production of Hitchcock’s North by Northwest with actors in sight of the audience using projectors to make a toy plane swoop as huge, terrifying crop-duster across the Festival Theatre’s backdrop.

In this case, much of the performance is meditative, sometimes ponderous, mainly fascinating. One occasionally hears spoken directions from the cast as they move their complex world of props, cameras, lights, smoke, and sound in the darkness. Seeing a figure seemingly flying vertically as a ghost on the screen, one also sees the technical reality of an actress lying flat on a black bench on the stage. Indeed, one could say there are two shows for the price of one. If only the seats were less punishing.